I recently moved from my hometown, , , to . Since I had to move my car and some of my furniture, I decided that flying and having to ship my car and all my stuff would be way too expensive. The cheapest option was to drive my car across the country and take what I could. Luckily for me, my grandpa offered to help me move. He lives in southern , and he drove from there to so I could move more of my stuff by putting it in the back of his pickup truck. After making that long drive, he drove with my dad and me from Kennesaw to , and then he and my dad drove from back down to southern . (My dad flew back to ). I’m grateful that he helped and I've never known anyone to do that much driving in a week and a half.

Since I was moving in January, we decided it would be best to go south along I-10 and then up the west coast to avoid snow and mountain passes. As the moving date got closer, we decided that the weather was actually better in the middle of the country, so we contemplated taking I-70. However, on our second day of driving, we decided to just go for it and take I-90. It was the shortest route but we had never considered it because it went through the Rocky mountains in and the Cascades in . Fortunately, the weather cooperated and we were able to get through all the mountain passes with no problems. My grandpa and dad are also experienced snow drivers, so I wasn't worried.

We ended up making the journey in only 3 days (2 full days and 2 half days). We left at noon on Monday and arrived in around 3:30pm on Thursday. On our first half day, we went from Kennesaw to O’Fallon, (a little east of ). Tuesday was a full day of travel and we made it from to a very tiny town in called Kadoka. Wednesday was another full day, and we went from , to . Thursday was a half day and we went from to . A typical full day of travel involved waking up at 4am to start driving and driving until about 6pm. 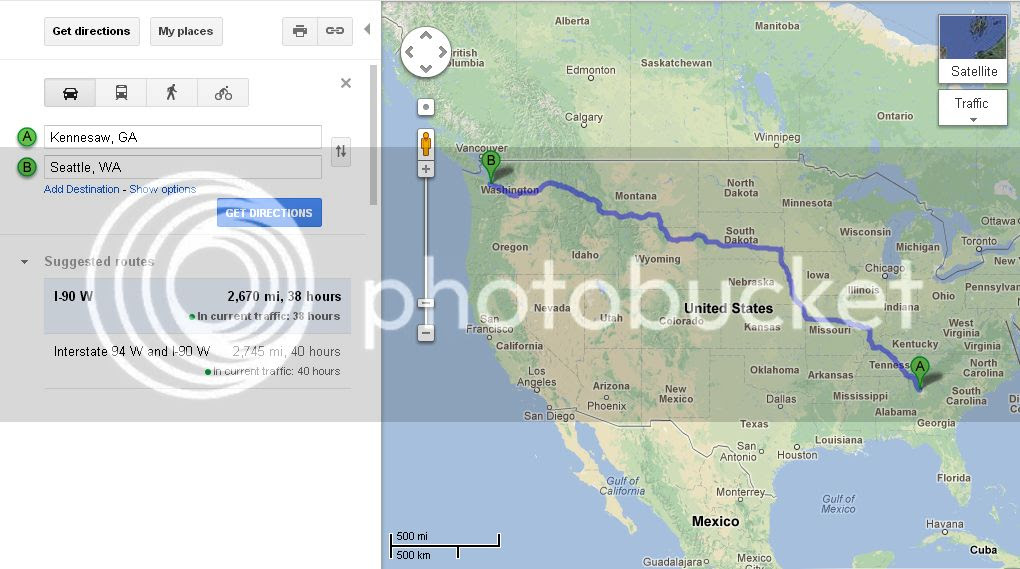 I’m really glad that we ended up going this way; for two reasons. I was able to add 3 new states to my list of visited states (I had never been to , , or ). 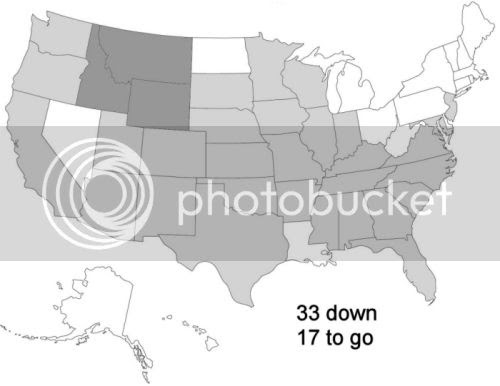 The other reason I’m glad we took this route is that I got to see some of the most beautiful scenery the has to offer. I love and appreciate nature, so this was an amazing trip for me and ended up being so much more than just a drive from point A to point B. This trip was even more of a highlight for me than graduating with my Master's degree (haha). When I got to Seattle I was thrilled to be there, but for the next 4 or 5 days I was a little depressed because I honestly missed driving and seeing so many beautiful landscapes. I was happy to be settling into my boyfriend’s apartment (as it meant the end of a temporary long distance relationship) and spending time with him, but part of me wanted to be back in my car or in my grandpa’s truck and driving through the vast expanses of land or through the mountains.

I enjoy driving and have done a lot of it in my lifetime: driving out to with my family to camp, driving to almost every year to visit family, commuting to for work for 3 summers, commuting 2 hours to graduate school from my house. As long as there aren't stupid drivers or horrible traffic, driving can be a relaxing experience and it usually gives me a lot of time to think and just be away from everything for a while. Driving across the country was the ultimate “being away from everything” experience. When I was alone in my car, I had time to think, enjoy the scenery, or sometimes just not think at all. It was a very freeing experience and is somewhat hard to explain.

Something else that is hard to explain is the experience of seeing the land in , , and . is probably one of the most beautiful states I've ever been to. It seemed like we were surrounded by mountains wherever we drove. The small section of we went through seemed like another planet. We passed through some smaller mountains as the sun was coming up, and then when we came down from the mountains everything just opened up and I could see for miles. There didn't seem to be any end to it or anything else in sight. I wish I could have taken better pictures there, but I know that even a 360 panoramic view would never be able to do it justice. was similar in a way – I could see for a long way and we were heading towards the setting sun.

I wish I could accurately describe the things I saw, but there is no way to ever put them into words. All I can do is tell everyone that at some point in their lives they need to drive on I-90 from about , to about . I would like to do it again myself and actually get out of the car to take photos and stop at any attractions (nature) I come across.

All the pictures I took (all 400 of them – I love nature photography) were taken out of a car or truck window. I think they turned out well for me not knowing anything about photography and for being taken through a window. I’d love to see how pictures would turn out if I went back after learning a little more about my camera and being able to take photos from outside of a vehicle.

I’m going to share my favorite shots from each western state. I tried to limit it to just one or two per state.

As soon as I can, I want to go driving out West again. Some part of me feels like that’s where I belong. I’ve lived in suburbs and cities all my life and I enjoy them, but sometimes I feel caged. The West is freedom. The land is stunning and the open spaces are so immense. That’s where I want to be. <3