One of my running goals for 2016 is to participate in a race every month. I couldn't attend the Magnuson Series race for January, so I found another race to participate in. There is another local race series - Northwest Trail Runs - that puts on different events each month.

I'd never participated in a trail run before so I wasn't completely sure what to expect. I had heard that trail runs take longer than other races due to the unpredictable terrain and the amount of elevation change involved.

It wasn't the best weather for a race. It was cold and rainy, so there was a lot of water and mud on the course. I was worried about slipping or falling, so that slowed me down some. The race started on a rough blacktop section with several potholes and uneven sections. One of the biggest problems during the race was congestion - at the end of the blacktop section, we had to go through some trees down a small hill. The path was skinny enough that only one person could go at a time, so there was a big bottleneck. We came to a complete stop and it took about 30 seconds until I could get through. I felt bad for anyone who was trying to PR and I was glad that I wasn't trying to beat any of my previous times.

I tried to make up some time after the bottleneck, but soon after we came to the first set of stairs and entered the trail part of the race. I knew there were going to be some stairs, but there was more elevation change than I was expecting and there were several sets of stairs throughout the course. There was another bottleneck up one of the hills that took even longer than the first bottleneck. Luckily, on the second lap of the course (we had to do it twice), there weren't any bottlenecks because runners had spread out by this time. This race was really challenging and it's probably the toughest I've done so far. I ended up walking up most of the stairs and hills because I was too out of breath to keep running.


Results: My time was 38:20. That is painfully slow for a 5k, but I have to keep reminding myself about the bottlenecks where I was at a complete stop, plus all of the hills and stairs. I ranked 35th out of 122 women and 65th out of 179 total runners (that finished the race - there were quite a few who did not finish).

I'm glad I didn't go into this race attempting to PR or even get a decent time. It was another good learning experience race. I'm undecided whether or not I'll do any more trail runs. I think that if I do, I'll choose one during the summer when the weather is nicer and one with a wider trail so there are fewer bottlenecks. Trail runs seem to be less about time and more about making it through a tough course with an unpredictable terrain, so it's race I would choose if I felt like being challenged.
Posted by Rhe at 10:13 AM 1 comment:
Email ThisBlogThis!Share to TwitterShare to FacebookShare to Pinterest
Labels: race recap, running, Washington

Last fall, I was looking for new parks to visit and I stumbled across Mercer Slough. I was on Google Maps, looking at all of the patches of green, and I noticed a large area that I drive by often was marked as a park. After doing a bit of reading, I found out it had several miles of trails and was a large wetland. I was interested because it seemed different than the usual parks I went to.

I loved it. I had no idea this peaceful park was sitting just off the interstate. I never would have known it was there had I not discovered it online. There were plenty of trails to walk on, a canoe water trail, and a blueberry farm. I've already been back a second time to run on the trails, and I'm excited for summer so I can come back and canoe up the water trail. 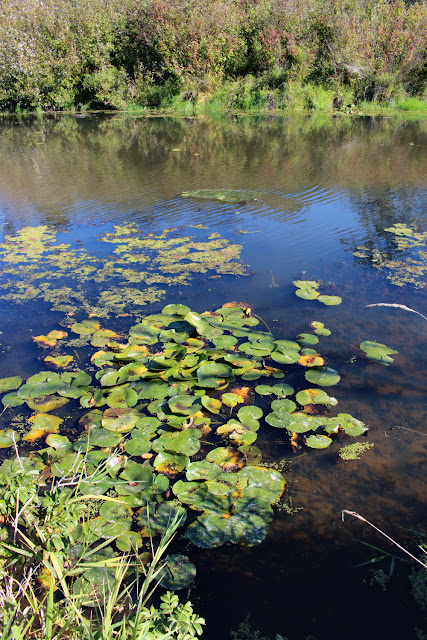 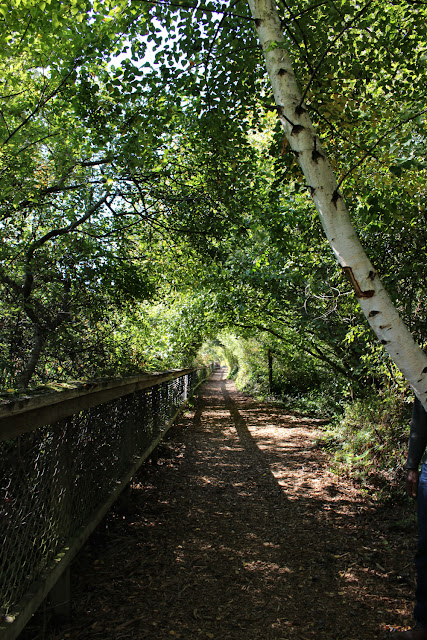 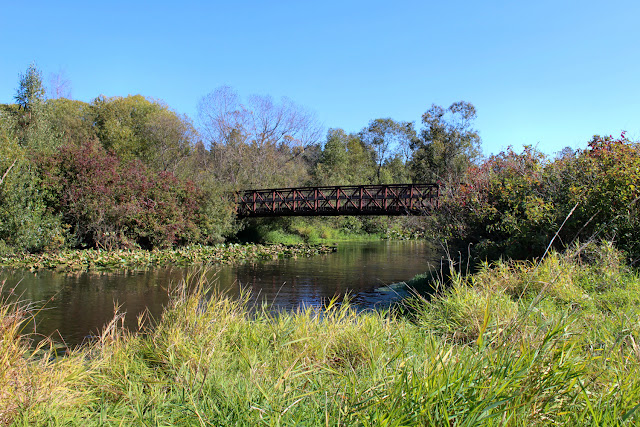 Posted by Rhe at 6:01 PM No comments:
Email ThisBlogThis!Share to TwitterShare to FacebookShare to Pinterest
Labels: trail report, Washington

I'm doing all of these in one post because it doesn't make sense to go back and do separate entries for 2015. I've decided to feature running on my blog as well since it's become a big part of my life.

In May 2015, after my 27th birthday, I decided to attempt to take up running. I knew I was out of shape and that it doesn't get any easier to get and stay in shape as one ages. Previously, I had said that running was just one of those things that I was never going to be good at. My boyfriend would have me join him on runs and I always felt like I was dying. It was difficult, I didn't enjoy it, and I didn't seem to improve from one run to the next. One of my best friends is a runner and does marathons. I would talk to her and read her blog about running and think, "That's amazing, but completely impossible. I could never do that."

On the day I decided to try running again, I told myself to just go out there, not try to go fast, and to stop when I got tired. I ended up running 3 miles straight, and was surprised to say the least. I kept at it and began to enjoy it - I liked pushing myself to do better than my last run. Looking back, I think I hated running and thought I was terrible at it because I was trying to keep up with my boyfriend and was being pushed beyond my limits at the time. Running at my own pace within my own ability level made all the difference.

I'm not going to be a very fast runner or a great runner, but I enjoy it. I'm happy running several times a week and participating in races every once in a while. One of my favorite things about running is that you don't have to compete with anyone else - you can compete with yourself by beating your time from the last race you did. I'm going to recap the races I participated in during 2015.

Microsoft 5k
This was my first official 5k. Unfortunately, I was sick the week of the race and lost my voice the morning of the race. I finished in under 30 minutes (29:46), which is a good enough accomplishment for being sick. I considered it a learning experience and knew I'd have a better idea of what to expect for my next race. I learned not to start out too fast and that racing involves a lot of maneuvering around other runners.

Magnuson Series Halloween Run 5k
I wanted to redeem myself after not doing well in the Microsoft 5k. The Magnuson Series puts on a small, local race at Magnuson Park every month. They do a great job - your time and place are recorded and they photograph everyone during the race. It's reasonably priced ($20 for the 5k) and after the cost of putting on the race is covered, the rest of the registration fees go to an organization that plants trees around the Seattle area. 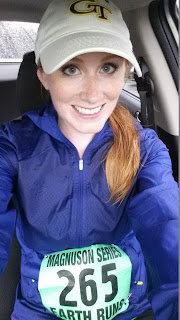 I went to the race alone. It was not the best day for it - it was cold, rainy, and windy. Despite that, I set a personal record for a 5k at 28:36. I got 34th place out of 158 people and 4th out of 25th in the female 25-29 group. I know it's a small race, but I felt accomplished with my placement. The biggest lesson I learned is to never wear a rain jacket when running. It may work for others, but I overheat quickly and the rain jacket kept twisting around while I ran.


Magnuson Series Turkey Trot 5k
Thanksgiving day race. This time, I took my boyfriend and met up with another friend, so I wasn't running alone. It was very cold but it was a gorgeous day, so the weather was already improved from the last time I raced. I wasn't trying to beat my last time and set a personal record, but that's what I ended up doing. I think running with my boyfriend and friend, who are faster than me, really helped.

My official time was 27:50. (My unofficial time was 27:32. Since it's a small race, they don't have chip timing. The race clock started but I didn't cross the start line until about 18 seconds later due to the amount of other runners ahead of me. I've started relying on a GPS watch during races to find out my actual time from when I cross the start line until I cross the finish line.) My goal time for a 5k is 27 minutes flat, so I was excited that I was closer to achieving that than I thought.


Magnuson Series Holiday 10k
I had worked my way up to running longer distances and decided to end the year with a 10k. Since it was my first one, my main goal was just to finish. My second goal was to get an average pace of 10 minutes a mile, and my third goal was to get under an hour, which I didn't think was likely since I had no idea how to race a 10k. I reached all 3 of my goals! 58:45 with a 9:25 pace. My boyfriend didn't run with me, but he came to support me and took pictures. 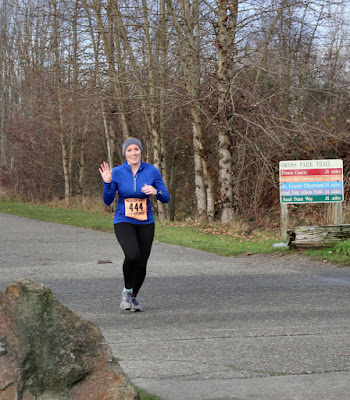