This past Sunday, I participated in the 5k in Paradise. It's a tropical themed 5k that was planned around Daylight Savings Time. There were two races: Chasing Moonlight at 1am and Racing Sunlight at 8am. Since I'm a morning person, I went with the 8am race.

The race took place at the local mall, so it was close to my house and had plenty of parking. The course started in the parking lot and then continued on the road that circled the mall. We had to make two laps around the mall before heading back to the finish in the parking lot. I liked this course more than I thought I would. It was convenient, fairly flat, and it didn't feel as long as other 5k courses. This may have been mental, since I grew up going to this mall and have driven on the road around it hundreds of times.


I was very worried about this race, because the weekend prior I started having issues with my knee. It was bothering me while running, and then it hurt when I hiked as well. I did some research and I'm 90% sure I'm having IT band issues. (The IT band runs from the butt/hip down to the knee. If you have weak hips and glutes - like I do - it can cause the band to pull at the knee, creating pain on the side of the knee.) I took the week off from running, except for when I attempted to run on Wednesday and only made it 1 mile. I was concerned that I wouldn't be able to get through a 3 mile race.

I worked on IT band rehab exercises all week, and the morning of the race I took a couple ibuprofen to hopefully reduce any inflammation and reduce any pain. My goal was just to finish the race. Luckily for me, I got through it with no problems! I almost couldn't believe it.


It was lightly raining and windy when I arrived at the race. By the time I got out of my car and walked over to the start, the rain had stopped. We all lined up, and then we were off. I tried to take it easy the first half mile to feel out my knee. I started passing people, and when my GPS watch beeped at the end of the first mile, I saw my pace was 8:56. I was quite surprised - I didn't know I was going that fast. Anything under 9 minutes is extremely fast for me. I figured if I could keep this pace up, I may get close to my official PR of 27:50.

At the second mile, my pace was 8:56. One second faster. My knee was still feeling okay, so I tried to speed up. I started to get tired on the third mile, and it was because my pace for the third mile ended up being 8:32. Sometimes I still can't believe I ran that fast for an entire mile, since I'm short and slow, haha. My overall pace for the 5k was 8:46.


I do wish I could have pushed a little harder, because my final time was 27:50 - exactly the same as my official PR. It would have been awesome to beat it, but I was amazed I even got through the race without knee problems, let alone reached my PR. I had been so certain before the race that I'd end up walking parts of it due to knee pain. 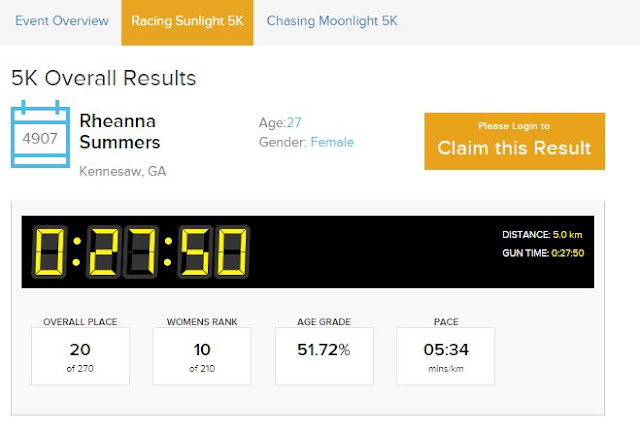 I'm looking forward to doing this race again next year. It was well organized, had a good course, everyone got a medal (my first one!) and there was a photographer taking free race photos. I love free race photos!