When I was in the Seattle airport, waiting to fly to Georgia, I started researching places to hike and explore in Georgia, as well as races to sign up for. I ended up on the site UltraSignup and found a trail race that took place about 1.5 weeks from the day I was arriving in Georgia. That race was the Flatlanders Canyon Crash Trail Run 5k/10k/13.1/50k.

I immediately signed up for it, because the race took place in a canyon! I grew up in Georgia and lived there a little over 20 years, and I had no idea that there was a canyon in Georgia. It seemed like a unique race and a good opportunity to explore a new place during my visit to Georgia. 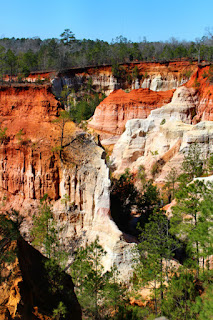 The race was in Providence Canyon State Park, about 45 minutes south of Columbus, GA. I drove down to Columbus the night before and stayed in a hotel with another one of my friends who runs. The next morning, we drove down to the park for the 10am start. The 50k had started earlier at 7am, and we saw a few of those runners completing a lap of the course while we were waiting for the start of the 5k, 10k, and half marathon. 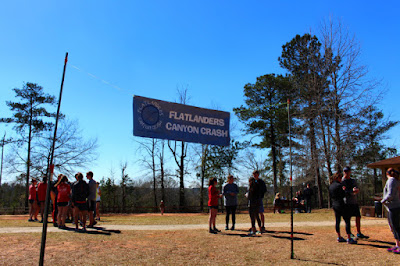 My friend and I did the 10k, which was one lap of the 6+ mile course. We started off running around the rim of the canyon, and then we descended through the woods until reaching the canyon floor. At that point, we had to run through a 1-3 inch deep stream that flowed over sand and red clay. Our shoes got wet and covered in mud, but we had been told ahead of time that parts of the course involved running through a stream. At times we had to jump over logs or duck under tree branches. It was messy and challenging but it was a lot of fun and I really enjoyed it.

After getting out of the stream, the trail continued through the woods and was fairly flat for a while. Later on, there were several steep hills. I don't think I saw anyone running up the hills - everyone was walking. We eventually came out of the canyon and the remainder of the race was along the canyon rim.

I did fine for the first 4 miles or so, but we encountered most of the hills in the last 2 miles and I was starting to get tired. The course ended up being slightly longer than a 10k. Instead of 6.2 miles, it was 6.77, according to my GPS watch. I ended up with a time of 1:18:54. I was happy with that, as I was anticipating something close to 90 minutes due to it being a trail run on a challenging course. For the 10k, I placed 8th overall (out of 25) and 5th out of 19 women. My friend that raced with me placed 3rd overall!

I enjoyed the race and would do it again. It was fairly well organized and we got a t-shirt and a pint glass. The course was marked with red paint and pink streamers and for the most part it was easy to figure out where to go. The only confusing part was in the stream on the bottom of the canyon floor. The course went through the stream, made a small loop, and then took us back through the same stream we had just come from. That meant that you had runners going in opposite directions in the stream, which caused us to doubt that we were going the right way when we first saw people coming back towards us. Other than that, it was a great course.

I'm looking forward to the next race in 2017!
Posted by Rhe at 6:35 PM
Email ThisBlogThis!Share to TwitterShare to FacebookShare to Pinterest
Labels: Georgia, race recap, running