Before I knew I'd be visiting Georgia for a while, I had signed up for a 10k to run across Seattle's new floating bridge. The old 520 bridge across Lake Washington needed to be replaced with a new bridge, which was finally ready last weekend. The 520 bridge is the longest floating bridge in the world.

I thought that running across the longest floating bridge in the world was a neat opportunity, so I planned a return trip to Seattle around the race so I wouldn't miss it. My parents decided to participate in the race as well. My dad ran, and my mom walked. There was a 5k option, but it didn't go all the way across the bridge so they ended up cancelling it and everyone did the 10k instead. There were over 13,000 runners and walkers participating in the race, which makes it the biggest race I've ever participated in.

The 520 Go Long 10k offered timed and untimed registrations. I was worried about my time, because I've been having issues with my IT band and knee pain. The day before the race, I had walked a few miles around Seattle with my parents and had knee pain just from doing that. I was sure that I'd end up walking a lot of the race.

The race began at 7:30am, so my parents and I took the train from downtown Seattle up to the University of Washington where the race was located. I've heard many complaints about how poorly organized the race was because they didn't start the participants in waves. They had all the timed runners and walkers on the left, and the untimed walkers and runners on the right. They let the timed participants start first, followed by the untimed participants. They said there were groups by pace, but I never saw any signs designating which pace was supposed to be where. I did spend a lot of the first two miles weaving around and passing people, but for a race with 13,000 participants, I didn't think it was too bad.


As soon as I started the race, I felt pain in my left knee. Usually it hasn't shown up until most of the way through a 5k, so I didn't think this race was going to go well. I decided to keep running until I couldn't. Luckily for me, I ended up running the entire race! My IT band got tight towards the end and there was a time when my right knee started hurting too, but I kept moving.

We turned around at the other end of the bridge and I stayed towards the center so I could see the participants coming towards me. I managed to spot my dad and said hi to him as we passed each other going in opposite directions.

I ended up with a time of 1:00:32 and a pace of 9:46, which was a lot better than I was expecting given I thought I'd have to walk the race. The results were up same day, which was quick for a race of this size. 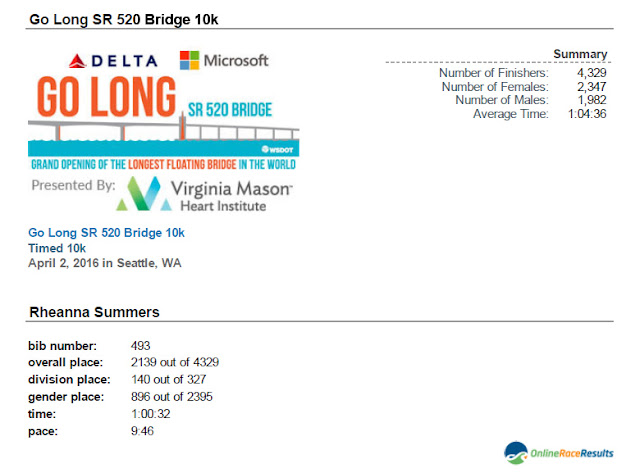 There are pictures from the race, but they were only able to pick out a few of me at the start and finish line. There are over 32,000 pictures and most of those were taken on the bridge, so even if I can find any of myself, it'll take a long time. 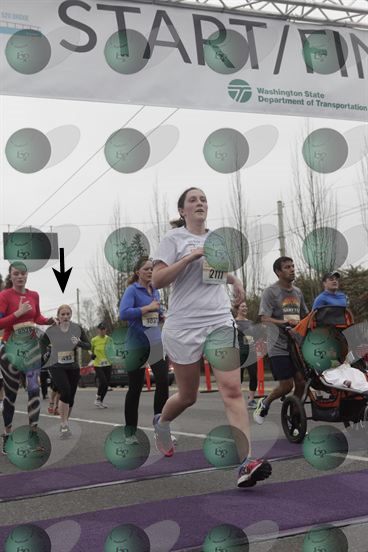 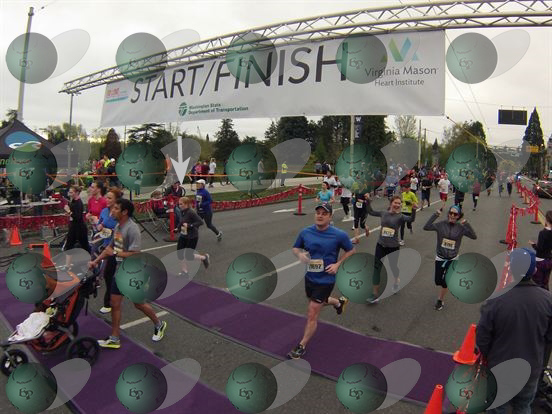 Although I wish the weather was nicer (it was chilly and overcast), it was fun to run across a bridge over a lake. This race is definitely one of the more scenic ones I've participated in.
Posted by Rhe at 7:26 AM
Email ThisBlogThis!Share to TwitterShare to FacebookShare to Pinterest
Labels: race recap, running, Seattle, Washington