Sometimes things happen when you least expect it.

It was a beautiful morning for a race - cool temperatures, no humidity, and the sun was shining. I couldn't have asked for better weather, especially in Georgia. 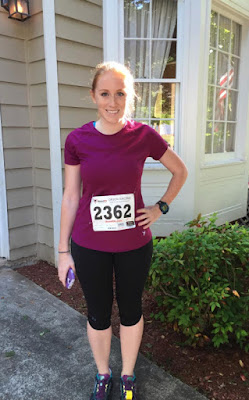 After my last race, the Georgia Tech Pi Mile, where I didn't do too well (28:48) because of the humidity and not taking it seriously, I was starting to doubt my running ability and thought that I was regressing after taking two months off due to an injury. I went into this race not expecting much and told myself to go out there and run and see what happens.

The race was in downtown Kennesaw and started near a church. They had closed off one of the main roads for the race. We started by running down this road to Swift Cantrell Park, ran through the park, and then ran back down the road the way we came. We passed the start location and the race finished in downtown Kennesaw. It was a nice course; mostly flat with plenty of space on the road and on the path through the park. It was never too crowded and it was easy to pass other runners. 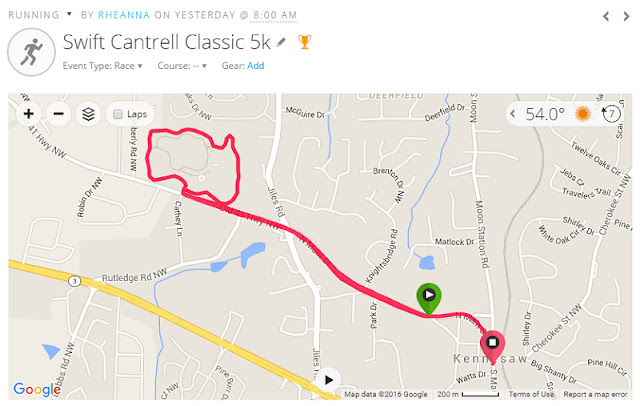 There were a ton of kids at this race, and because I was afraid of running them over I went up very close to the start line. I usually don't do this because I'm not fast and you're supposed to line up according to your pace, but this was not a serious race and I knew no one else would be lining up accordingly (there were kids at the very front of the start). It was fun to be that close to the start line and be able to take off immediately. I tried not to start out too fast.


During the first mile, I was being passed by several people. I began to worry that I was going really slow somehow, but I kept reminding myself that I had started close to the front, so all of the faster runners that started behind me were going to pass me. At one mile, my pace was 8:39. That seemed about where I was when I got my PR of 27:05, so I realized I was doing well. I told myself to just keep up the same pace. I was actually pretty consistent throughout the race - my second mile was 8:42, and my third was 8:41. I think this is the most consistent race I've ever run pace-wise.

When I started the third mile, things were still going well, and I knew I could PR if I tried. When my watch beeped at the 3 mile mark, I was a little over 26 minutes. With only 0.14 miles left, I started sprinting. I could see the finish. As I was approaching, the race clock was somewhere in the 26:40 range, and I knew I had it. My watch said 26:54 when I crossed the finish line and stopped it. I did it!! I got a new personal record AND broke 27 minutes, which was my 5k goal for 2016. I was super happy that I wasn't even halfway through the year and I had already accomplished my goal.


My official time was 26:51. We had chip timing, but it wasn't true chip timing because there were no mats at the start, only at the finish. That made me glad that I started right at the front, since the chip time was more of a gun time. Results are here. (Age group results here). My place was 133 out of 751. In my age group, female 25-29, I got 4th out of 26.

Now I have to decide if I'm going to relax for the rest of the year, or try to break my record again. I'm not sure about that yet - I'll have to see how things go, if my IT band continues to behave and if I can pick up my mileage again and get back to running 20-30 miles per week.

I'd had a rough couple days prior to this race, and I was beginning to get discouraged about a few things in my life, but this race and finally breaking 27 minutes really cheered me up and gave me the boost I needed. Now I feel like I can move forward and accomplish the things I've set out to do. This is what I love most about running - that it makes me feel like a strong, capable person, and even if things aren't going well in other parts of my life, I'm still achieving something great when I run and succeeding in at least one area of my life!
Posted by Rhe at 9:35 AM
Email ThisBlogThis!Share to TwitterShare to FacebookShare to Pinterest
Labels: Georgia, race recap, running