Granite Mountain is a hike I really enjoy. The first time I did it back in 2013, I was enthralled by the views and the wildflowers and huckleberries along the path. It instantly became one of my favorite hikes. The huckleberries are a tasty snack on the way up, and I've taken a few extra home with me to make huckleberry pancakes. From the top, Mt. Rainier is visible, as well as Mount Stuart, the Teanaway, and sometimes Mt. Baker.

To get to Granite Mountain, take exit 47 and go left, crossing under I-90. At the T intersection, go left again and follow the road to the trail head. Unless you get there early, you'll most likely have to park along the side of the road as the parking lot at the trail head will have filled up.

For the first mile, the trail is mostly flat. Once you reach the split between Granite and Pratt Lake, go right to continue up to Granite. The trail immediately starts gaining elevation. For at least the first two miles, the trail stays mainly in the forest. After the two mile mark, you'll enter the high meadows, which are filled with wildflowers and huckleberries (if the time is right). When you first catch sight of the lookout at the summit, you'll have about a mile left to go from there. The rest of the trail is rocky, with large boulders and talus slopes. Part of this section is flat, but the last quarter mile is steep and is the most difficult part of the hike for me.

Ideally, I'd like to hike Granite Mountain when it's a clear day, but the forecast on the day I planned for the hike was overcast and partly cloudy. I accepted that I wouldn't have the usual Granite Mountain views. (However, I've included a couple photos above from my past hikes to show the view). When I left for the trail head, I ended up driving through some rain and noticed that many of the mountains were covered by clouds. Conditions didn't improve much for the first two miles of the hike. I was tired from not getting much sleep, one of my feet was bothering me, and I knew I wasn't going to be able to see anything at the top. It was also raining enough that I had to pull out the rain cover for my backpack and put that on. I didn't want to quit the hike, but I also wasn't feeling it and part of me wanted to go back home where it was warm and dry. I stopped and debated turning around and not finishing the hike, but then I heard people coming up the trail behind me. As stupid as it sounds, I didn't want to quit in front of anyone, so I kept going. 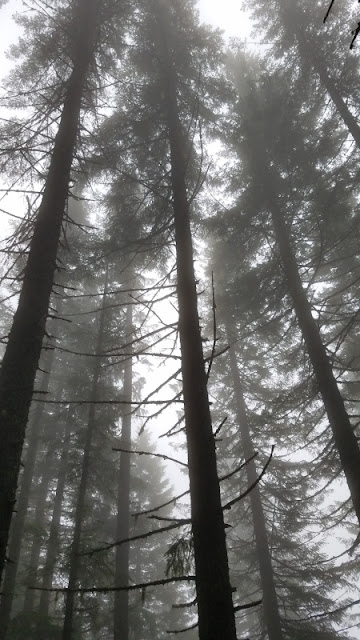 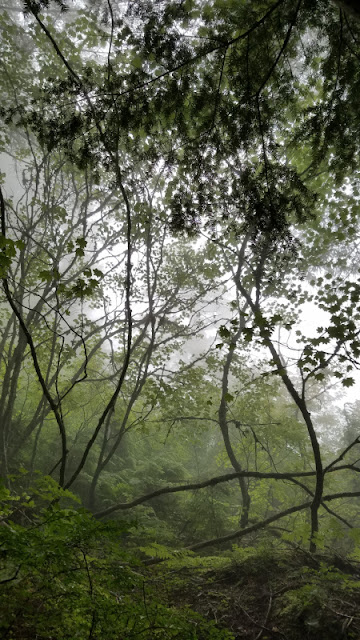 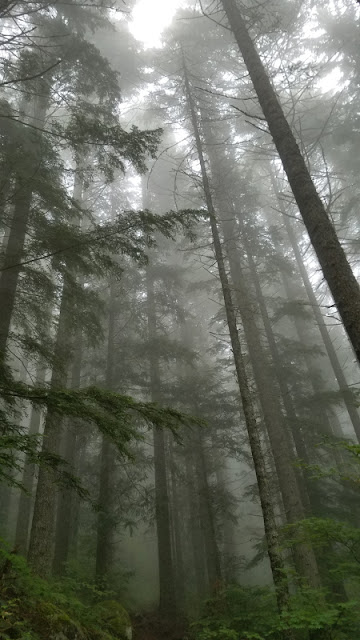 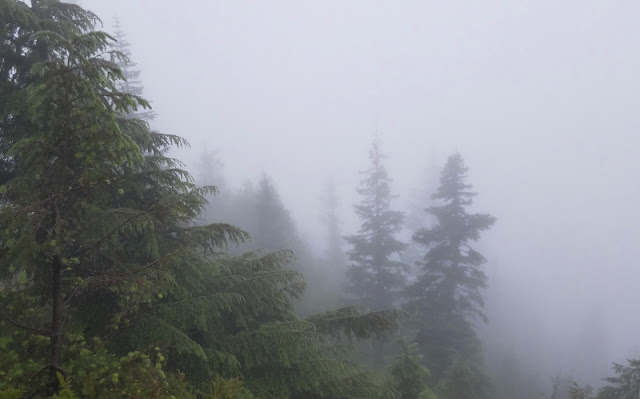 I'm glad that I stuck with it, because it stopped raining once I got further up the mountain. I still couldn't see more than 40 feet in front of me, so it was difficult to figure out where I should be going at times. There are several unofficial trails leading away from the main trail, and since I couldn't see very far and had no concept of where I was on the mountain or if I was heading in the direction of the lookout, I was unsure if I was still on the main trail. Luckily, I ended up choosing the right path, or the path I was on was just a short alternative and joined up with the main trail in a few yards. 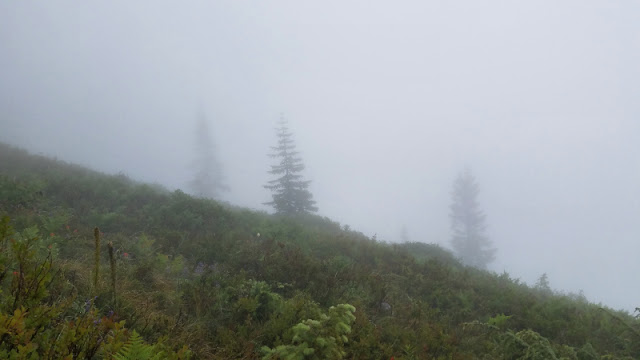 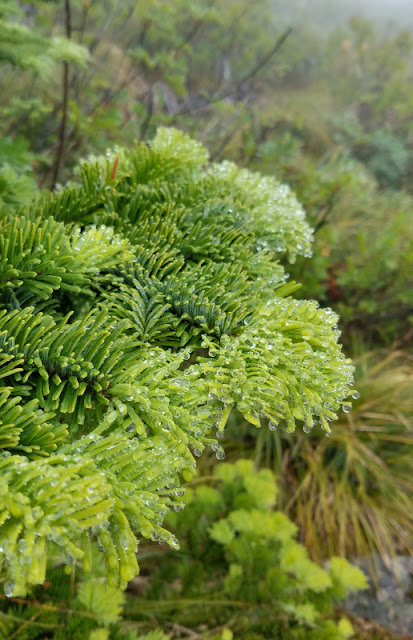 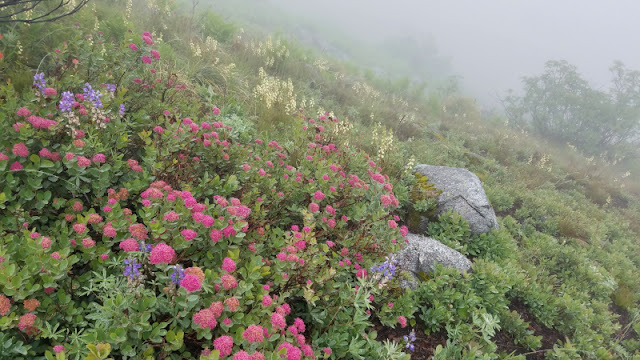 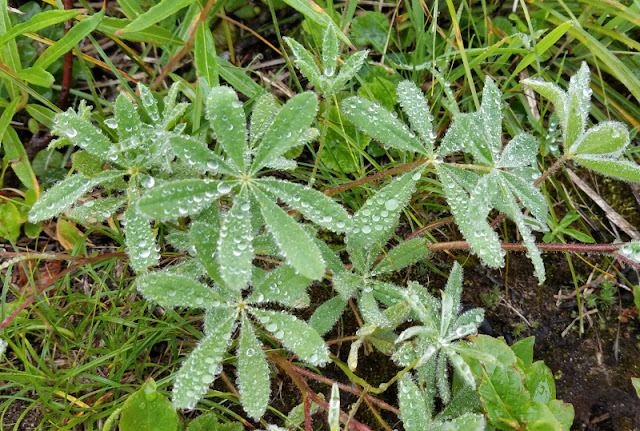 I did appreciate the appearance of the mountain in the clouds and fog. The plants and flowers on the trail were covered in water droplets, and the trees appeared out of the fog like ghosts. This weather gave the hike a mystical feel, and I thought it was beautiful even with the absence of the sun and clear skies. The fog and clouds did clear up a little towards the top so that I was able to see further. There were a couple patches of snow still on the ground, but overall the trail was in great condition. 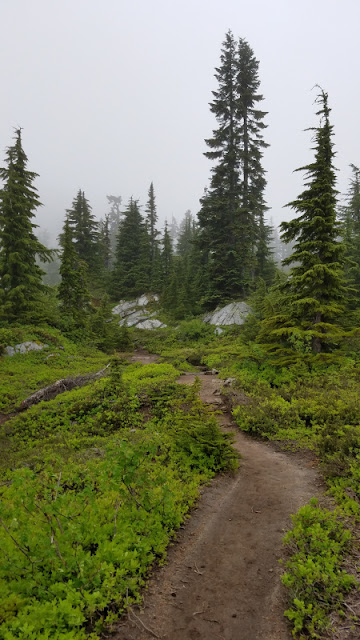 There were only a few other people at the summit when I arrived around 10am. Some sat under the lookout for protection from the weather, but it wasn't raining at the top and there were a couple minutes where we could feel the sun's warmth and the sky got a bit brighter. If I was doing this hike for the first time, I would have been disappointed about not having any views of the surrounding mountains, but I was okay with the situation since I had done this hike twice before. In the future, I'm sure I'll do this hike again, and I will return on a clear day!