For my first half marathon, I decided to sign up for a race I had heard a lot about. It's called Beat the Blerch, and it's based on this awesome comic about running by The Oatmeal.


It ended up being the best, most fun race I've ever done. Everything about it was hilarious and awesome. There were people dressed in Blerch costumes. The aid stations had couches and cake. I got more food at this race than any other race I've done. 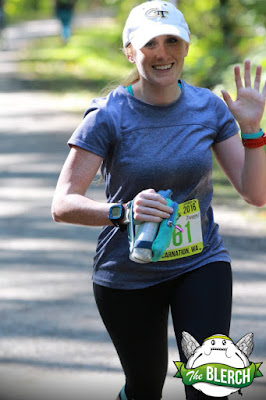 This race was also fitting for my first half marathon, because I was in no way prepared to run one! I was supposed to start my training plan in July, but instead spent the next two months hiking instead of running since I had just moved back to Washington. I'd also never run more than 8 miles in my life. My only goal was to successfully complete the race. I had originally decided that I wasn't going to have a time goal, but I looked up the average half marathon time for women, which was around 2 hours 20 minutes, and figured I should at least get under that. And I did - I finished with a time of 2:16:27. 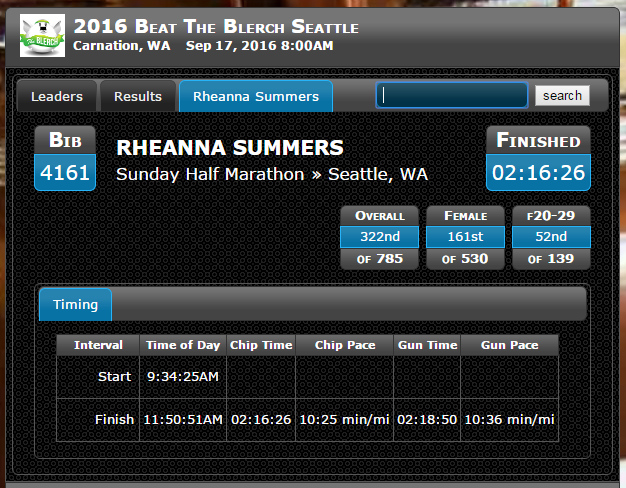 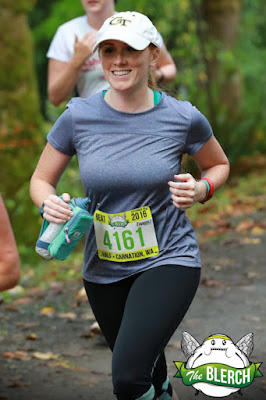 Let there be agony: the IT band issues I had earlier this year flared up around mile 5. I wasn't expecting that, but given I had spent the last two months hiking instead of running and not stretching as much as I should, I wasn't suprised. I ran the last 8 miles with knee and hip pain on the left. The last 3 miles were more of a limp-run than a real run. The "Blerch" part of me said this wasn't going to go well, I'd have to walk, and I wouldn't meet my time goal. The determined part of me said that I'd run an entire 10k with IT band pain right from the start before, so I COULD do this. I never walked, and I met my time goal. Take that, Blerch!

Let there be cake: I ate a piece of cake mid race, because I could. It was awesome and delicious. Best aid station food ever! And then I had 2 more pieces of cake after the race. 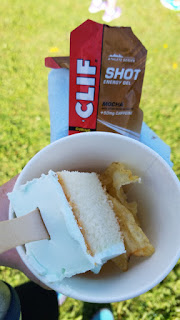 The race was well organized. The marathon, half marathon, and 10k all started at different times. Packet pick up was easy and there was plenty to do while waiting for the race to start. The Oatmeal was signing books, there was a contest for who could eat a donut off a string without using their hands the fastest, and there were other booths set up with running gear. After the race, there was a spot to take a photo with a giant jar of Nutella. 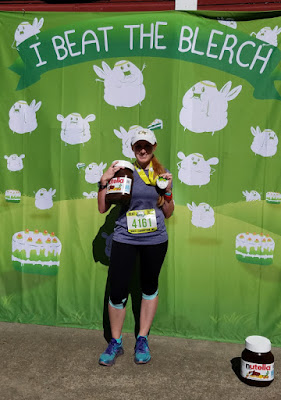 The course was pretty and was easy to run on for the most part. It was in Carnation, Washington and started in a park surrounded by farmland. There were a few places where the gravel was a bit rough, but the course was mostly flat with a wide path. 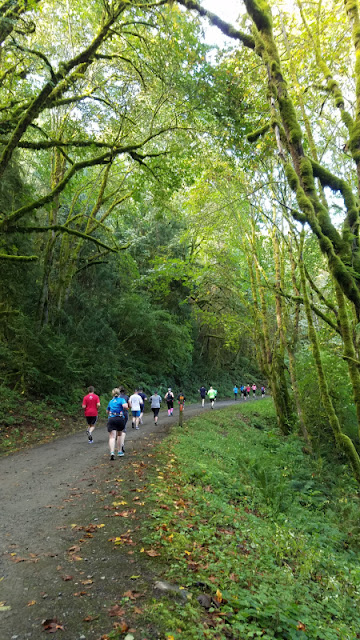 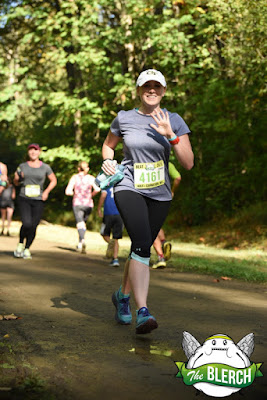 Race photos were free, and we got a good amount of stuff in the race packet. Gummy snacks, a tshirt, a deck of Blerch themed cards, and Blerch stickers. I enjoyed the race so much that I signed up for next year as soon as registration opened the following week.

Posted by Rheanna Summers at 7:06 AM
Email ThisBlogThis!Share to TwitterShare to FacebookShare to Pinterest
Labels: race recap, running