This was my second half marathon ever and it was a great course along the Sammamish River Trail, through Marymoor Park and then on the East Lake Sammamish Trail to Lake Sammamish State Park. The trail was flat, and it was advertised as a fast course. I could see how this is a good choice for a half marathon to attempt a personal record. There was also plenty of room on the trail - it never felt crowded or like I had to struggle to pass someone. 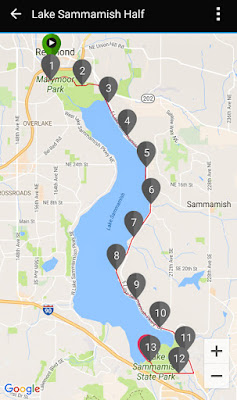 It was supposed to rain, but the weather turned out gorgeous - sunny and not too cold.

My first mile was right around my goal pace of 10 minutes per mile. My second mile was faster at 9:33. I figured if I could maintain that I'd definitely do better than my last half and would possibly get 2:10 or under, but I knew that was me starting out too fast and being unaware of my pace. I knew I couldn't sustain that, and it proved true as each mile inched back towards 10 minutes per mile. Then around mile 6, my IT band issues flared up. Usually they're only in the left leg or most severe in the left leg, but this time the right leg started first and ended up being the worst of the two. I felt like I was being stabbed in the outside of both knees, and like I had a knife stuck in one of my hamstrings.


Since I had run an entire 10k with severe IT band and knee pain from the start, and since I had run the last 8 miles of my first half marathon with IT band pain, I knew I could finish the race even though this had flared up. The disappointing thing was that I wouldn't be able to stay on track for 2:10 and I wasn't sure what my chances were of doing any better then last time. I had to pull over and stretch a few times, but it didn't help much. Towards the last 4 miles, I just wanted to be done. I managed to pick up the pace for the last mile, and I ended up finishing 4 minutes faster than my last half marathon - 2:12:06 vs. 2:16:27. After a stressful week and my IT bands flaring up, I'll take it! This is one of the things I love about running - as long as you do better than you did last time, that's enough.


I really enjoyed this race. Parking was plentiful and convenient. I've never been able to park that close to the starting line for such a big race. The course was beautiful, flat, and fast. I want to do this race again next year with hopefully more long distance experience and try for 2:10 or less.

I also liked that the finish was on the same path where I'd previously run a 10k, so I knew what to expect. It also finished near where I used to live, and the East Lake Sammamish Trail was something I used to run on, so it was easier to pick up the pace when I knew the end was near and I was almost "home". Apparently they took a video near the finish line - I'm in the bright purple/blue shirt: https://www.youtube.com/watch?v=CTHsCNc9WJo&t=1h0m45s


After the race there was chili and potato chips available, as well as bananas. Since my first half marathon is where I discovered the tasty Clif Mocha energy gels, I was excited that they were going to have those same gels at this race so I could try another flavor. Midway through the race, I took a gel from someone holding out "Razz" (raspberry flavor). It was delicious, so now Mocha and Razz are my go to energy gel flavors and I bought a box of both shortly after the race.

This race was the day after my half marathon, and I knew it was not going to go well after my IT band issues had flared up. Fortunately, I didn't have a long drive to get to this one. It was convenient - just a 20 minute walk from my apartment. I've never walked that far to the start line before, but I thought it was a great way to warm up and I'd like to walk further to more start lines if possible.


Somehow I ended up in corral A, which was right up by the start line. I did have to provide proof of my usual pace time - maybe most people didn't do this? I don't know how else I could have ended up in a corral that close to the start. Starting in waves helped - I never felt like I was dodging a ton of people or like it was too crowded.

I made it almost a mile in (going much slower than I normally would for a 5k) before my right leg and knee started acting up. It wasn't so much pain this time as it was feeling like my knee/leg was weak and was going to buckle. It was more annoying than anything, because pain I can push though, but feeling like my leg is going to give out at any time is more difficult to ignore and keep going. There was one point where it felt like someone was cutting the tendons/ligaments in my outer right knee with a blunt scissors, but I survived. I was super slow - 11 minute pace for my 2nd mile. I knew it was going to be one of my slowest 5k times ever, which was frustrating because the course was fun. There were some downhill and uphill parts, but my favorite part was running on 99 through the tunnel. It was interesting running right near where I live, because with the issues I was having I thought "Can I stop and just go home? It's right there."

I said this was going to be my last big, for-profit race, but I really liked it and I'd love to do this race again. However, I don't think I can if it falls on the same weekend as the Lake Sammamish Half. I'm hoping next year I'll be better off when it comes to running and should have my IT band issues under control and be able to handle a 5k after a half, but we'll see.


The finisher's mug at the end was the best part. I knew we were getting hot chocolate, but I didn't know we were getting melted chocolate that we could dip cookies and pretzels in as well. That was my favorite part. I wish I could have this food after every race! The volunteers handing out the finisher's mugs were super nice. They asked if it was my first time doing this race and if I had fun. 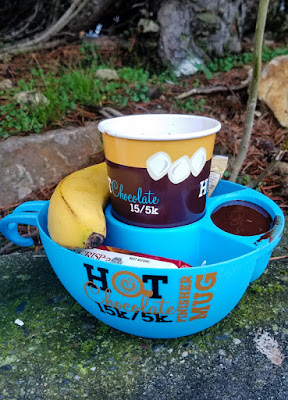 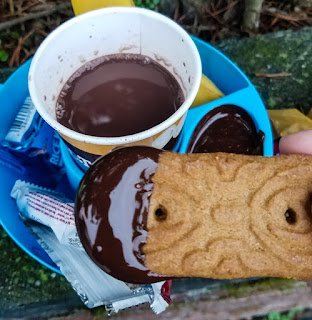 As I was leaving, I was passing by some other finishers and another woman pointed to my shirt, and then to hers, and said "I'm not the only crazy one!" She was also wearing the Lake Sammamish Half shirt that we got yesterday at the race. :)
Posted by Rheanna Summers at 11:15 PM
Email ThisBlogThis!Share to TwitterShare to FacebookShare to Pinterest
Labels: race recap, running