Unfortunately, I got mono in the month before my trip and these races. I was advised not to run them by my doctor when the mono was lab confirmed about nine days before my first race. Not running these races (which I paid a lot to register for and which are the focal point of my year) was not an option. Luckily for me, mono didn't affect me too much. I didn't miss any work, although I hated having to stop running so that I could make sure I was recovered as much as possible before my trip. However, I didn't know if the fatigue that is associated with mono would be a factor for me during my races. 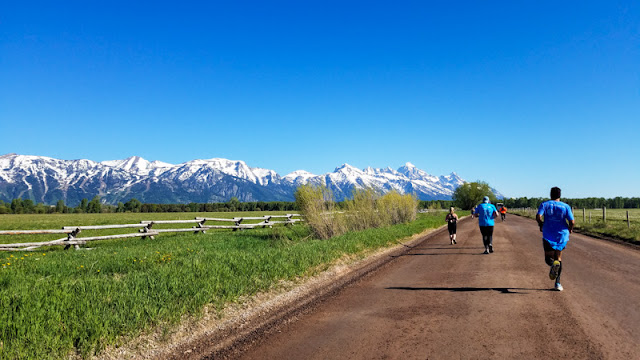 My parents were with me for the Grand Teton portion of my trip, so they dropped me off near the start line around 5:45am. The race started at 6:30am, and for the first mile I wasn't sure how well the race was going to go. I was a bit tired and my lungs didn't feel like they were in great condition as I'd had a cough for the week leading up to the race. I told myself to run for as long as I could and then I'd start alternating running and walking. I felt better after the first mile and I ended up running the majority of the race. My biggest issues were actually not the mono, but my left IT band, right 2nd toe, and the altitude.


I was surprised and annoyed that my IT band began acting up around mile 5, as I'd done nothing active for the past month and any overuse issues had plenty of time to heal. But later I determined that sitting in a car for 13 hours to drive to the park probably didn't help. As for my toe, it's the same one that I had issues with the first few months I started running back in 2015. I developed a blister under the toenail, the entire thing turned black, and then fell off. It did this twice. After the race, I saw that I had a large blister under the toenail, so I assume that I'll be losing this toenail after my other two races.


My left IT band and right toe were the reasons I had to start alternating walking with running. The mono didn't seem to be a problem until the last two miles, which is when I started dragging and ended up walking more than running. I felt tired and guessed it was a combination of mono and the altitude. Several other runners around me were having trouble with the altitude - I heard that mentioned as the reason they had to slow down and walk for a bit. The last two miles were the hardest, but running with a view of the Tetons definitely helped. It's the most inspiring course I've ever run.


Originally I had assumed that I'd have to walk most of the race and would take somewhere between 3 and 4 hours to finish it, but since I ended up running most of it I set my goal to get under 2 hours and 45 minutes. My gun time was around 2:50 and my chip time was 2:45:08. While I hated being 30 minutes slower than my other half marathons, I had to accept that it's a decent time for running my first race at a high altitude and recovering from mono.


My parents were waiting for me at the finish line. The race was well organized and all the runners got a free finisher's photo, a protein shake, a banana, and a recovery box filled with fruit snacks, vitamins, nuts, a granola bar, chips, and an energy waffle. After the photo, we got on one of the shuttles provided by the race, which took us back to a rec center a couple blocks from our hotel. As I usually go to races alone, it was nice to have someone to drop me off for the start so I didn't have to worry about parking, and it was nice to have someone waiting for me at the finish line.


It was a great race and I'd love to do it again someday when I'm not sick. And of course, any reason to come back to Grand Teton National Park is a good reason!