It's taken me a while to finish my posts for Grand Teton, Yellowstone, and the races I ran while at the parks. The biggest reason for the delay is that our medals were delayed by two months (we were supposed to get them the day of the race).

My second race in the Caldera Triple was the easiest one - the Yellowstone 5k. It took place in the small town of West Yellowstone, since race organizers aren't allowed to put on races inside national park boundaries. The course was on one of the roads in town, and then went down a forest service road in a wooded area.

The weather could have been nicer. It was about 43 degrees and raining during the entire race. This didn't bother me much since I'm used to running in chilly and rainy weather in Seattle. My hotel was a few blocks from the start line, so I walked over and took shelter under a tree until it was time to line up at the start.

I didn't go all out for this race since I was still recovering from mono and my lungs weren't quite right. They were fine during the race, but I was coughing quite a bit in the few minutes after I stopped running. I didn't look at my Garmin watch at all during the race. I wanted to save my energy for the half marathon which was less than 12 hours after this race. My time was 33:11; probably my slowest 5k ever that wasn't an intense trail race. 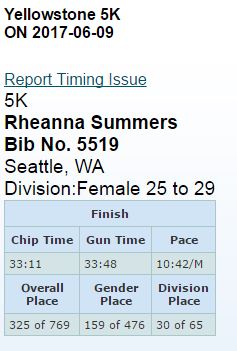