One more Yellowstone post. I had to make a separate one just for the bison that I saw in Yellowstone. They’re definitely a main attraction of the park, and when my parents said I would see a lot of them, they weren’t kidding. I figured I’d get lucky and see a few, but that is not how it works. You don’t even have to try to see bison. It’s impossible to not see them. 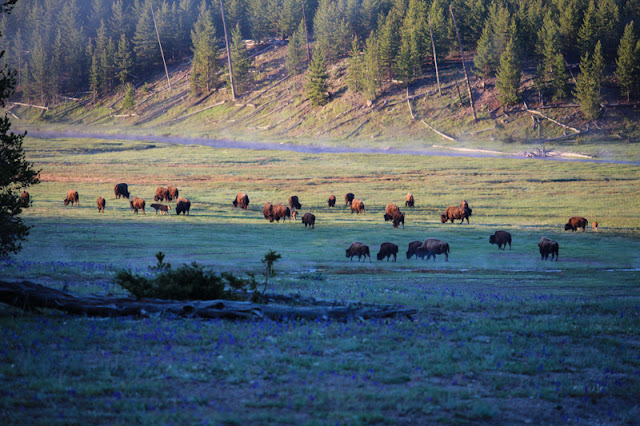 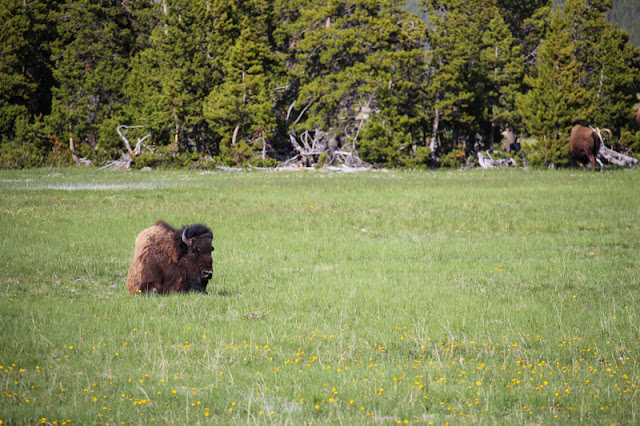 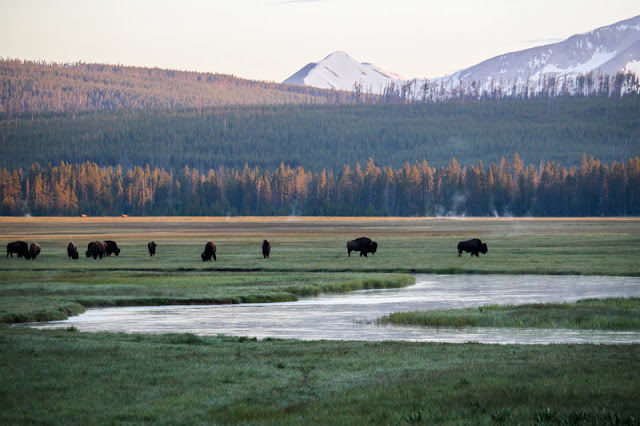 They were most active in the meadows, and at dawn and dusk. I typically got up around 4:30am, left the campground at 5am, and was generally driving through the park until 6am. I got most of my best pictures of bison around this time.  One morning, a herd of them were in the road and on either side of the road near one of the hot springs. 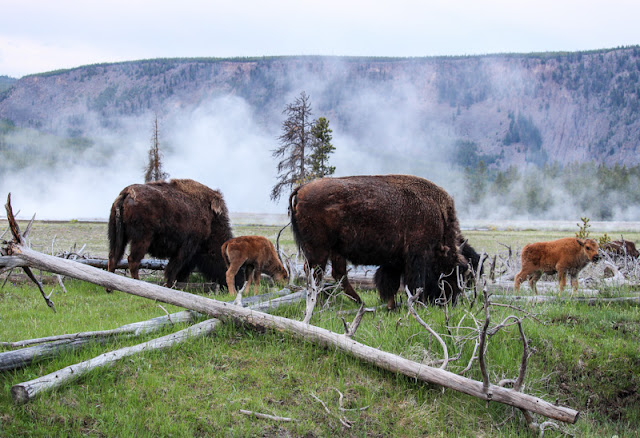 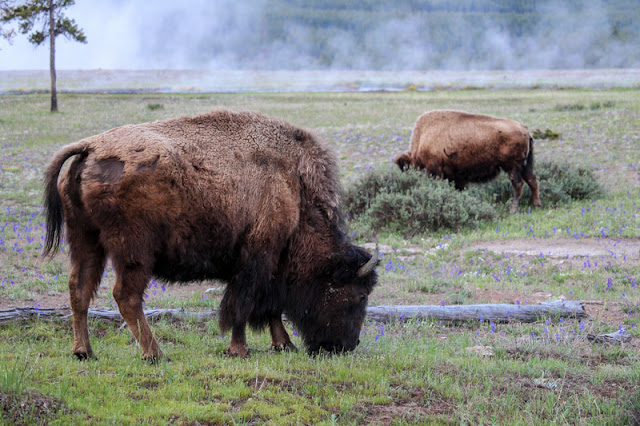 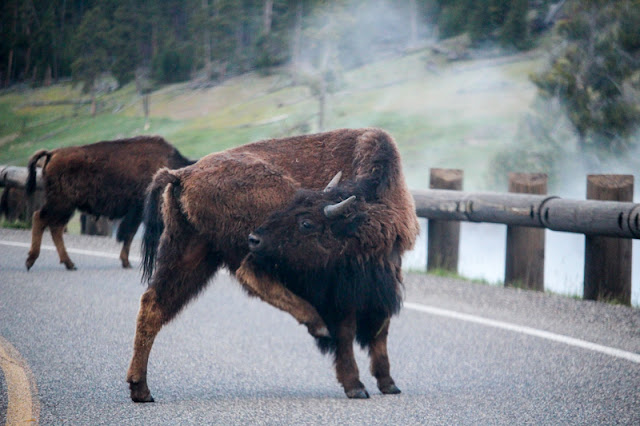 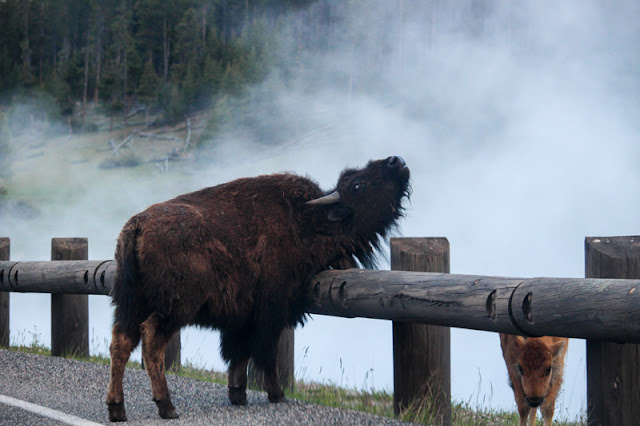 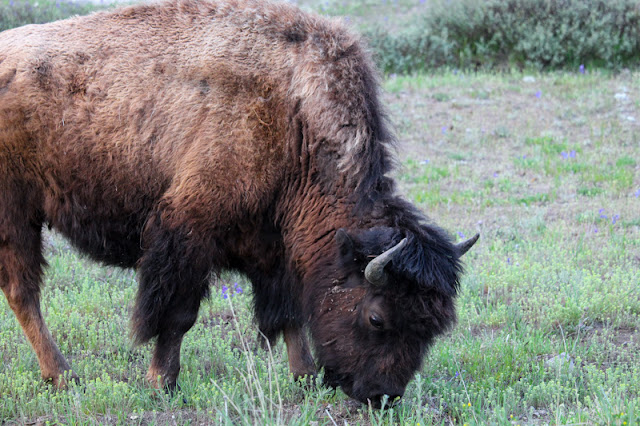 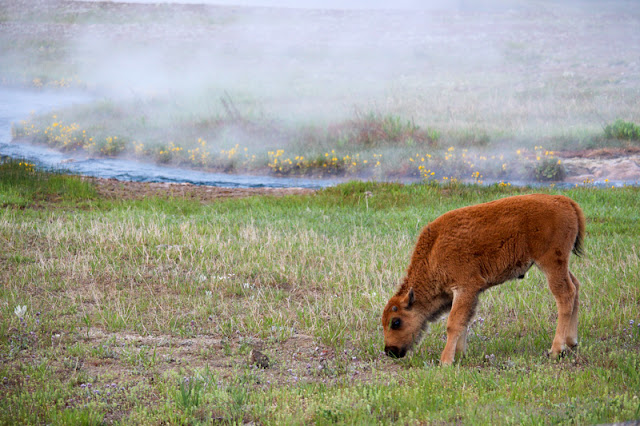 Another time, I drove down Fountain Flat Road where there was a herd laying down in a field. They eventually all got up, crossed the road, and had to ford the river to get to the meadow on the other side. 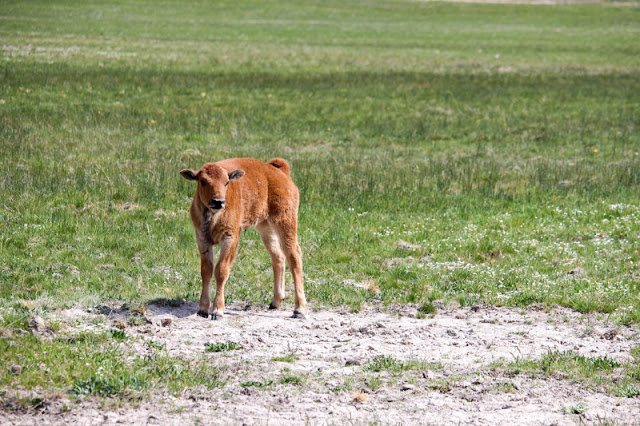 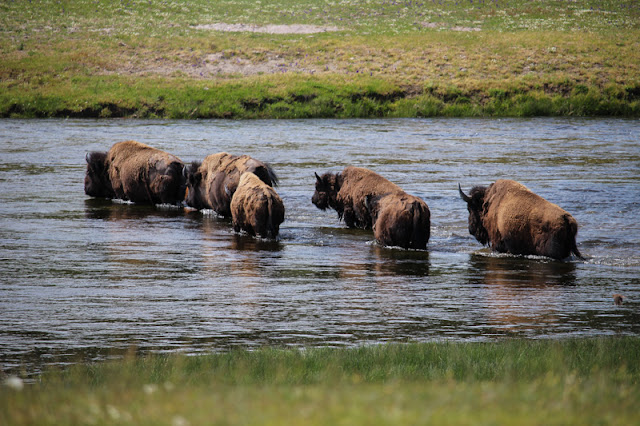 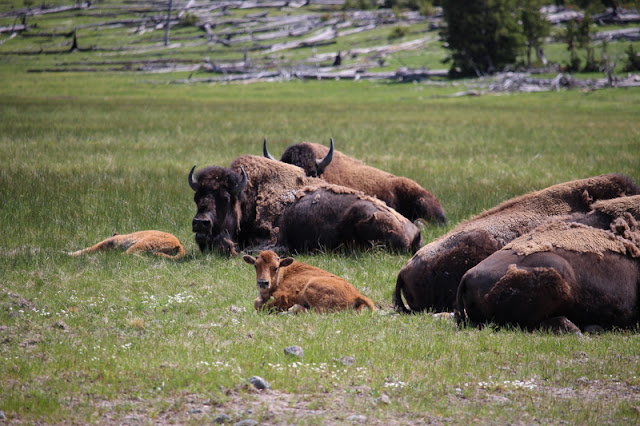 One of my closest photos was from when I drove to Biscuit Basin and two bison were laying in the grass near the parking lot. I was able to stand at the edge of the parking lot and use my telephoto lens to zoom in on them. 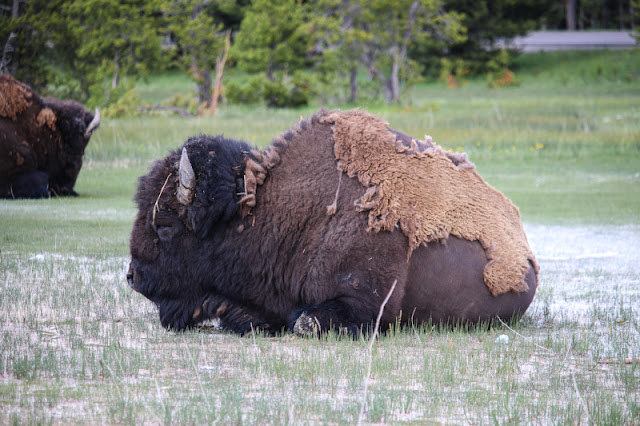 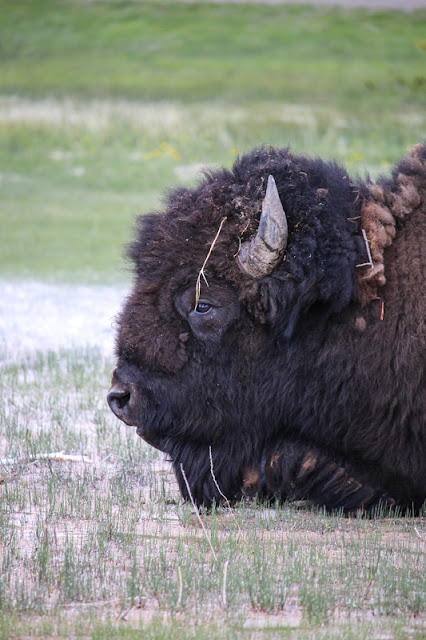 However, bison being so prevalent throughout the park does have its issues. One early evening I was heading back to my campsite and saw a few people stopped on the side of the road, as there was a bison herd in the meadow. I stopped and pulled to the side to take a few pictures. The entire herd was on the left side of the road, except for one lone bison that had yet to cross. He was approaching the road to cross it and was right near where a few of us had our vehicles in the pull out. Another park visitor was driving towards us on the road and going too fast - definitely over the 45 mile per hour speed limit for Yellowstone.

One woman tried to motion to the driver that there was still a bison about to cross, because at that moment he was behind our cars and couldn't be seen from the road. The driver either didn't understand or wasn't paying attention. Right as the bison came out from behind our cars and stepped into the road, the car went by, missing him by a few feet. The poor bison was visibly startled and quickly ran across the road. I'm glad he didn't get hit, but I was annoyed with the park visitor who was driving too fast and not using common sense.

The driver was about to go through a meadow, which is a common place for bison, and there were cars pulled over and people with cameras, which is a good indication that wildlife is nearby. They should have known to slow down and be careful. The point of this is that if you visit a park with wildlife, please follow the speed limit and slow down when there are indications that animals might be near the road.


I also learned a lot about bison while I was in the park. I didn't know that they could run up to 30 miles per hour, and I was able to witness this one evening when I saw a herd of bison sprinting across a meadow. While on the Yellowstone website, I learned that there were only two dozen bison in the park in the early 1900s, but that the park has done such a good job in keeping bison safe and growing the population that there are now about 5,500 of them.

The issue is now that there are too many bison. Since they are not allowed to roam beyond park boundaries due to risk of spreading brucellosis, a bacterial illness, to livestock on private property, they have to be contained in the park. If their population continues to grow, there eventually won't be enough space or grass to graze on. The park is working on a solution to this problem.

For more information on bison in Yellowstone, check out this page: https://www.nps.gov/yell/learn/nature/bisonmgnt.htm
Posted by Rheanna Summers at 8:21 AM
Email ThisBlogThis!Share to TwitterShare to FacebookShare to Pinterest
Labels: animals, Wyoming