Two years ago, I was supposed to take a trip to Canada and hike to Garibaldi Lake. The night before the trip, the person I was going with realized their passport had expired, so we had to cancel the trip. This year, I decided I needed to go back to Canada and finally go on this hike. Instead of just going to the lake, I decided to hike to Panorama Ridge so that I could view the lake from above.

I was a little worried about this hike, since it would be the longest hike I've done so far and I would be doing it alone. Many people split the hike into two parts and camp at Taylor Meadows overnight before continuing to the ridge, but it is possible to do in a single day. Some people said it took them 12 hours and I wondered if I'd run out of daylight. I'd also heard about cars having their windows broken and even some having their tires slashed at the trailhead. This is a problem at Washington trailheads too, but it's easier to deal with that at home than when in a foreign country.


Since I didn't want to run out of daylight, I got to the trailhead around 6:45 am and was on the trail before 7 am. The Rubble Creek trailhead is one of the largest I've ever seen and there were already over 100 cars when I arrived, as well as about 20 hikers preparing to start their hike. I felt better with other people around and figured there would be less of a chance of car break ins with this many vehicles at the trailhead. (When I got back later that day, my car was fine and there were probably 400 cars at the trailhead, with most of them stretched at least a half mile down the road).

The first four miles of the hike were the worst part. It was a steady incline up dry, dusty switchbacks through the forest, and this ended up being the most tiring part of the entire hike. I had an energy gel part of the way up. After I got out of the forest, the hike involved walking through meadows and more trees and vegetation. The trail split several times, as there were two different campgrounds and trails to other areas, but everything was very well signed and it was clear where I should go. I was impressed with how well maintained the trail was, the signs at each split, and that there were outhouses and day shelters all the way up there. 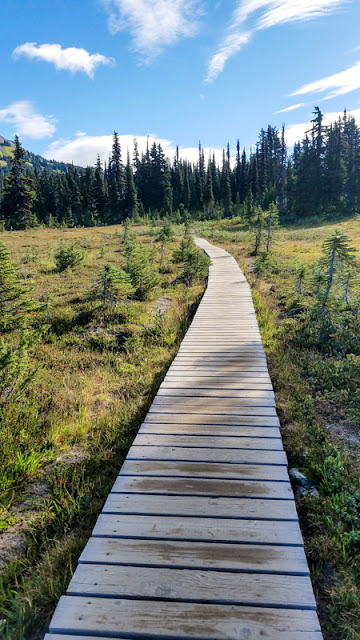 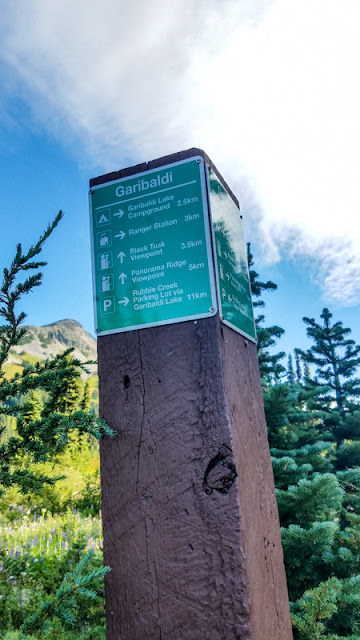 Things didn't get interesting until around mile seven. This is when I started going through meadows with wildflowers and came across a few lakes. Shortly after that, I could see bits of the intense blue of Garibaldi Lake and some snow capped peaks, and I could see the ridge that the trail would end on.


After a couple flat miles, the trail began to climb again. Once I reached the ridge, the trail got rocky and almost became a scramble in a few spots. There were two places where I had to cross a snow patch, but they were both small and not too steep, so it was easily doable in hiking boots with no poles. For the most part the trail was easy to follow, and there were metal stakes sticking up in places where it may not be clear. 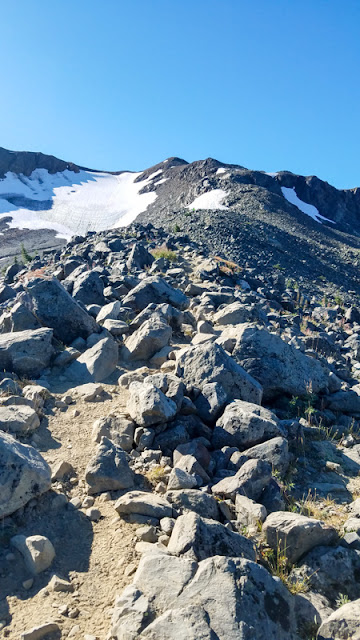 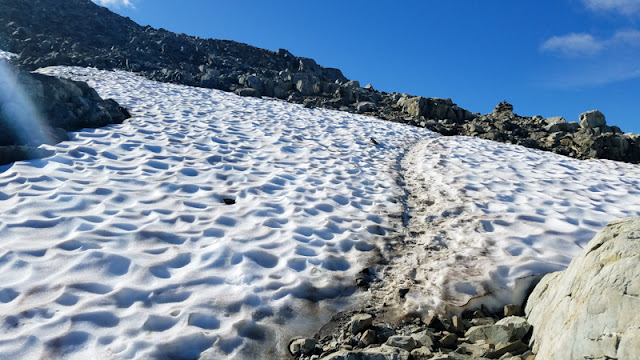 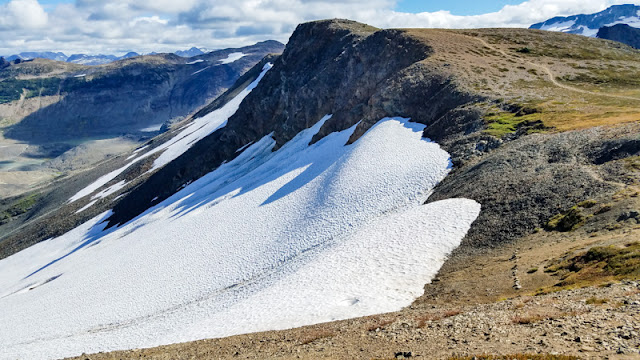 As soon as I crested the ridge, Garibaldi Lake was visible. I can't really describe what it was like to see something that blue - it didn't look real, but it was right there in front of me. The snow capped mountains serving as the backdrop were gorgeous. There were actually snow capped mountains in all directions. I truly felt like I was out in the middle of the Cascades and had entered another world. 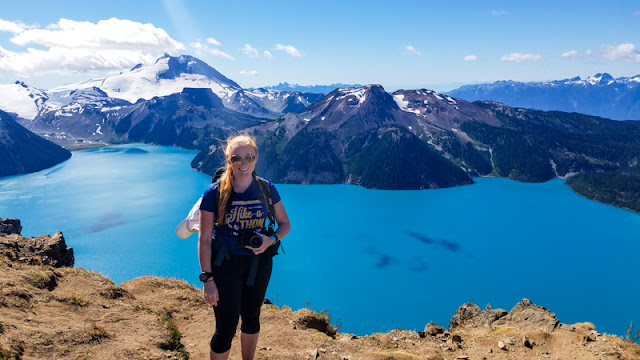 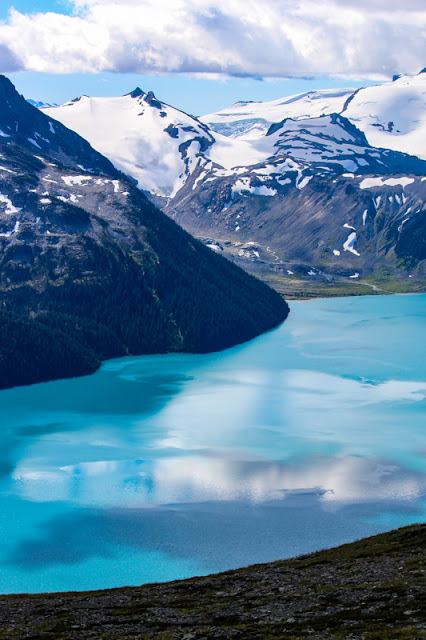 One of the biggest highlights was the Black Tusk. It was alien-like and added a lot of character to the landscape. There is an option to hike most of the way up, but it's a difficult trail with a lot of loose shale that slides with each step. After that, it's a technical climb to the top that only experienced rock climbers should attempt. I'm hoping one day I can go back and hike up Black Tusk as far as possible. I considered doing it the day after my Panorama Ridge hike, but I knew it would be smarter to rest and I wasn't ready to go back up the same trail I had just done. 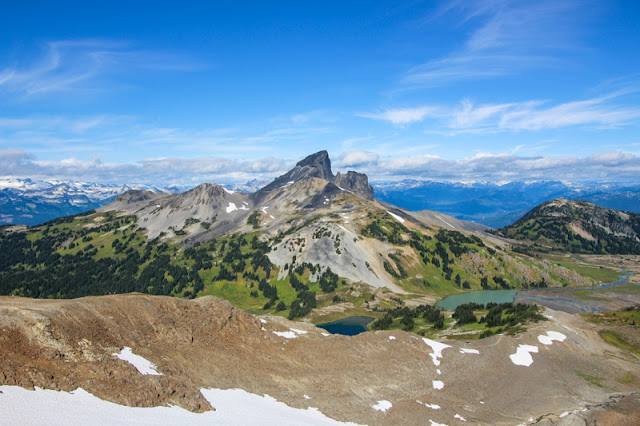 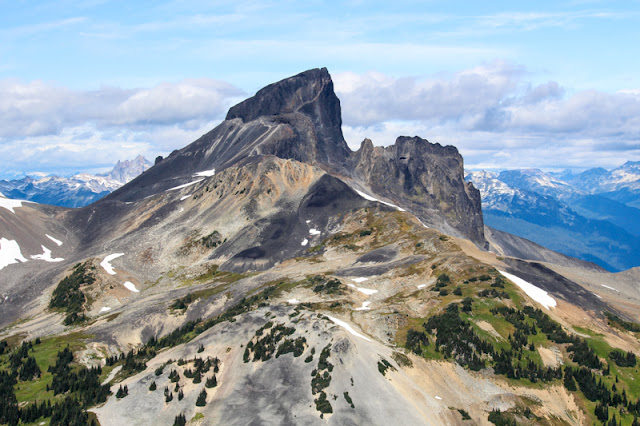 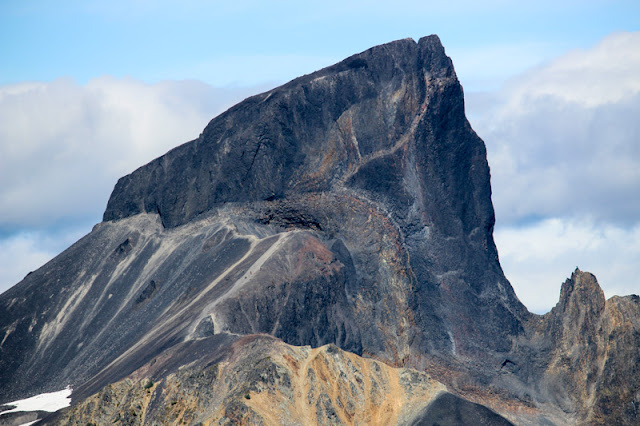 I spent some time walking along the ridge and taking pictures from different angles. Usually pictures don't do justice to what I'm looking at, but I was happy with my pictures and thought they actually did a decent job of capturing the landscape and colors. Of course, pictures can never convey the sheer scale of the landscape and how far I was able to see. I wondered what it would be like to set off into the distance - it was so vast! There were other trails that went past the ridge, but those would require backpacking. 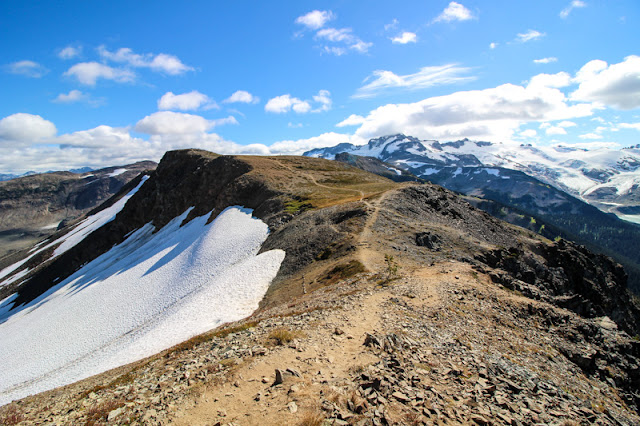 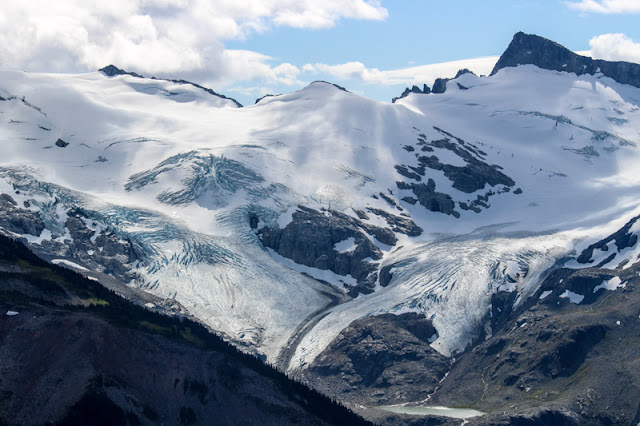 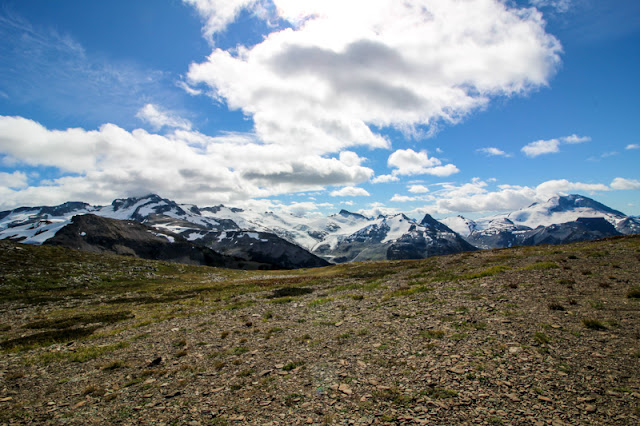 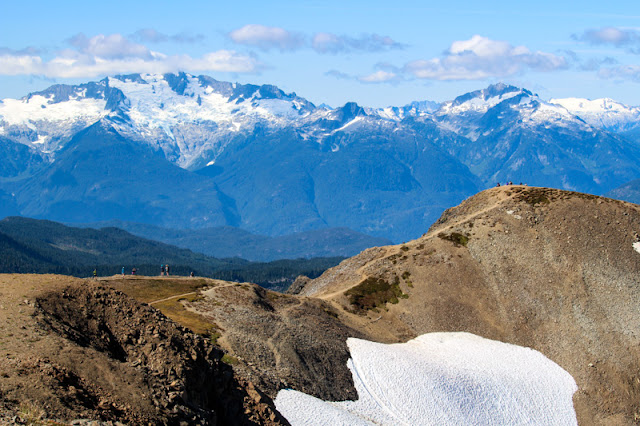 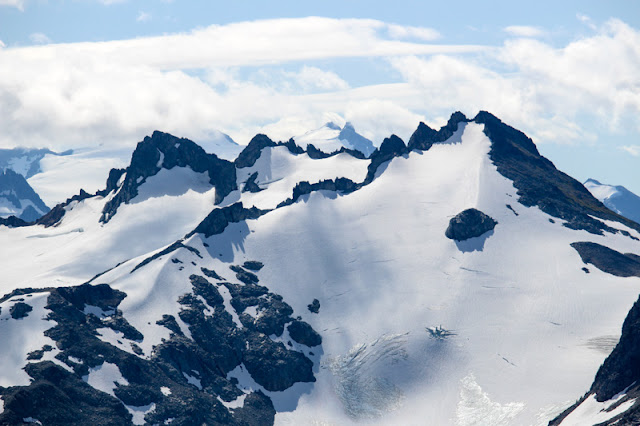 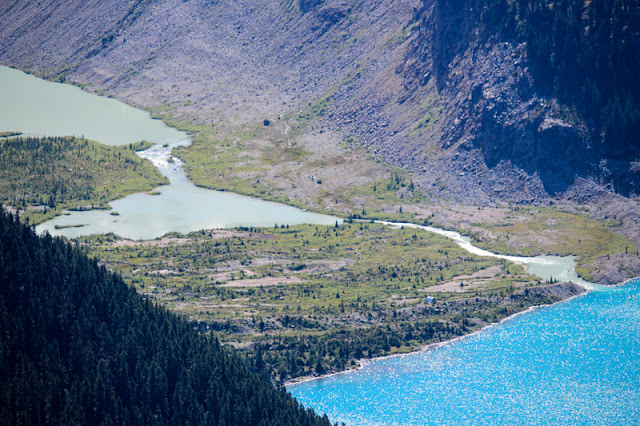 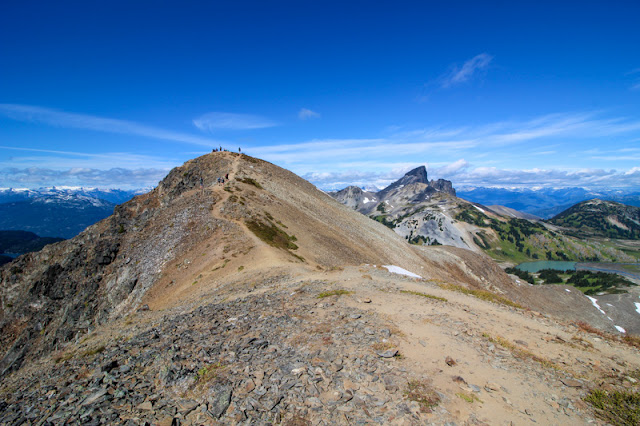 The distance to the ridge was 8.77 miles according to my GPS watch, and it took me a little over 4 hours to get there. I gained 5,095 feet of elevation, which is the most I've done in a single hike. I was hoping I'd hit a peak elevation of 8,000 feet, but the highest point of the ridge was only 7,979 feet. Close enough! (Note: The hiking guides say the elevation of Panorama Ridge is 6,900, which is a full 1,000 feet less than what my watch measured. The elevation gain listed is the same as what I measured, so I'm not sure how the ending elevation can be different unless my watch was a 1,000 feet off at the starting elevation as well.) On the way back, I cut over to the trail that went down to the lake shore before connecting back with the main trail. Going this route ended up adding to my return mileage, which ended up at 10.15 miles. It took me almost 4.5 hours to get back, but this included stopping to take pictures. 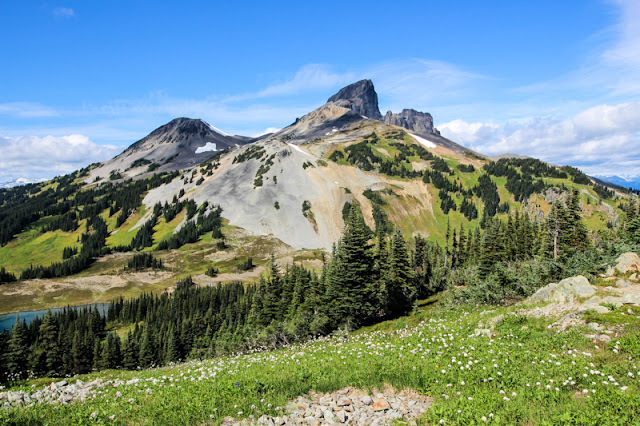 The lake shore was nice because I got a close up look at the water, which is even more vibrant than when viewed from above. Garibaldi Lake sits at an elevation of 4,900 feet and is up to 800 feet deep in places. The color is caused by glacial flour, which is a fine silt that comes from bedrock that is ground up by glacial erosion. The lake itself is kept in place by a lava dam called The Barrier. It was formed 9,000 years ago and there are concerns about how stable it is. 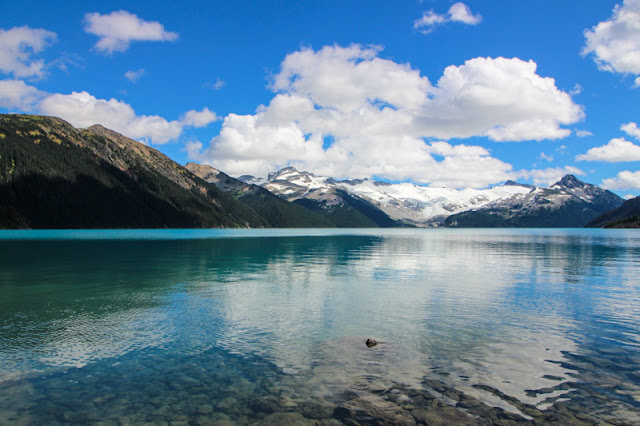 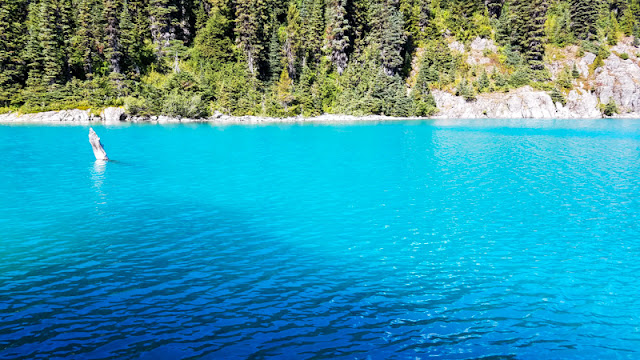 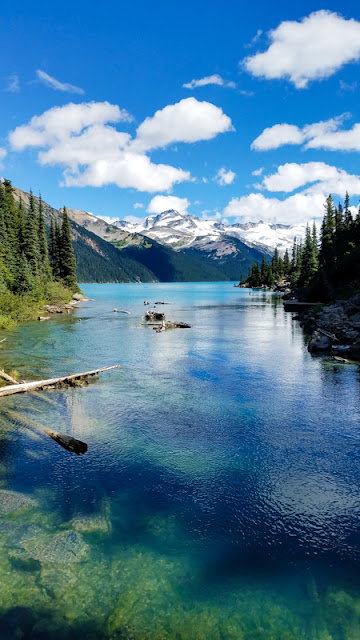 Overall, the hike was almost 19 miles (18.92) and took me 8.5 hours of hiking time and took about 9.5 hours total. I got back to the trailhead around 4:15 pm. I was glad that it did not take 12 hours like some people said and that I still had plenty of daylight left. Mileage and distance-wise this should have been my most challenging hike, but it wasn't bad at all. It wasn't as tiring as my 14 mile hike to Mt. Ellinor in Washington, but I did consume a lot more calories on this hike: 3 Clif bars, 4 energy gels, and an entire package of energy chews. 1,350 calories in one hike! It does make sense given the hike took most of the day and burned over 3,000 calories.


Panorama Ridge is now on my list of favorite hikes. There's nothing else quite like it! I think it offers the biggest variety of terrain and natural features I've seen thus far - old growth forest, alpine meadows, wildflowers, alpine lakes, snow, rock scrambles, mountain peaks, glaciers, and a ridge. The only thing missing is a waterfall. I hope to come back one day and hike up Black Tusk as well as hike up Panorama Ridge again! 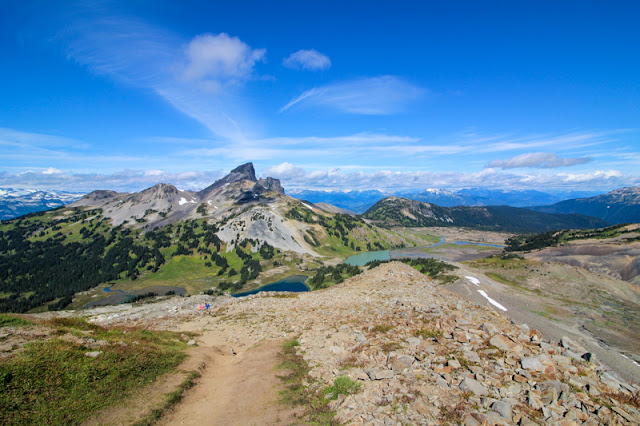 Posted by Rheanna Summers at 9:10 AM
Email ThisBlogThis!Share to TwitterShare to FacebookShare to Pinterest
Labels: Canada, hiking, lake, trail report