Larch trees in the North Cascades

One of the things that's been on my bucket list for a while is larch trees - deciduous trees whose needles turn bright yellow and then gold in the fall. These trees are only found at higher altitudes and in specific locations, so I had to hike in the North Cascades in order to see them. 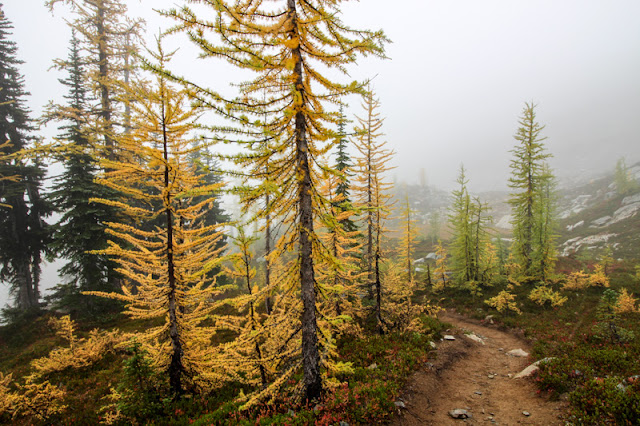 Last year, I had to go back to Georgia for a commitment around the time the larch trees were turning, so I missed them. For this year, I blocked off two weekends in my calendar when I thought they might be ready. When I read hiking trip reports leading up to the first weekend, it sounded like the larches were just beginning to turn but weren't ready yet. So, I planned for the second weekend - September 30 and October 1. I camped at a KOA with awesome showers in the town of Winthrop. I love visiting Winthrop, and it was only a 30 or 40 minute drive from most of the trails I was planning to hike.

On Saturday, my first hike was the Maple Pass Loop. This hike is known for larches and fall colors. Unfortunately the weather wasn't cooperating and it was rainy at the lower elevations and snowing with temperatures in the 20s at higher elevations. I could tell it was an amazing trail, but I couldn't see much beyond the path due to clouds and fog. That said, I still loved it! The larch trees were a mix of yellow and gold, and the fall colors in the Heather Pass section of the hike were amazing. I've never seen so many different fall colors all in one area. 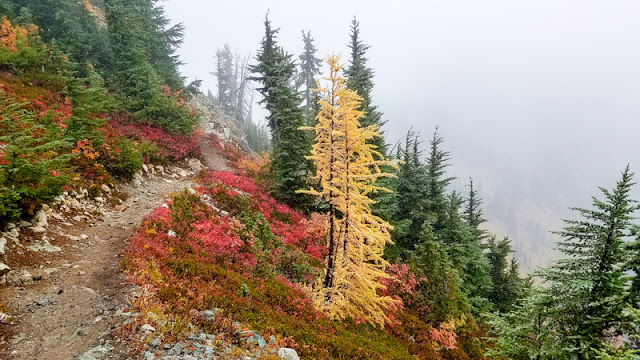 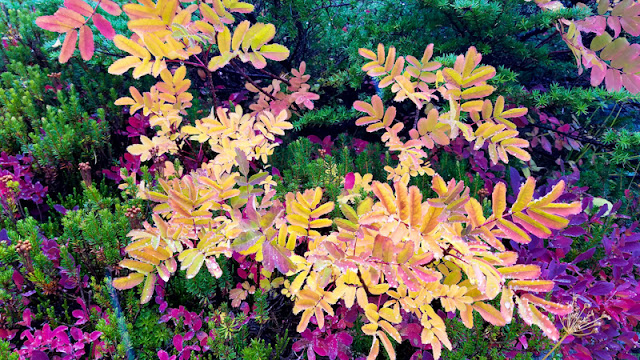 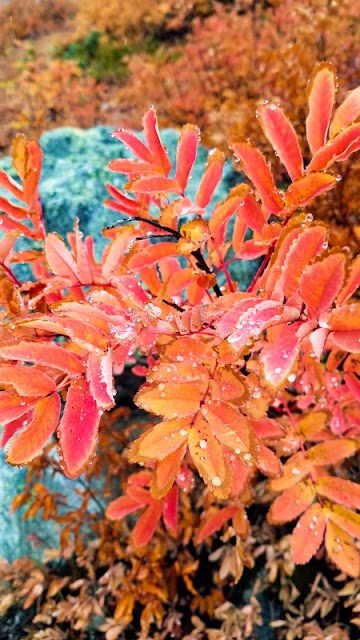 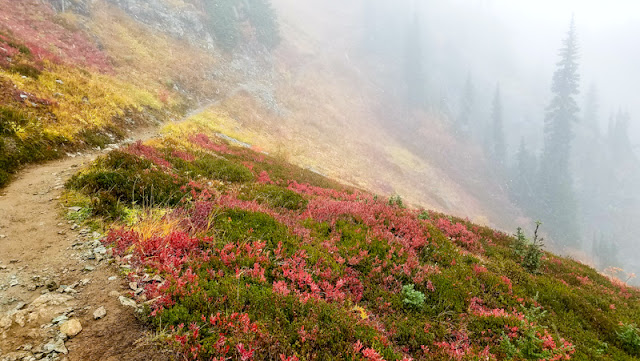 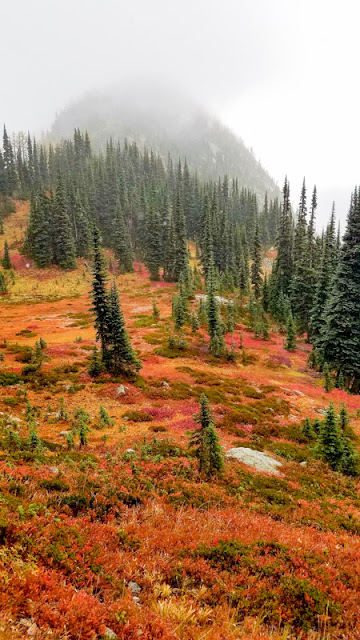 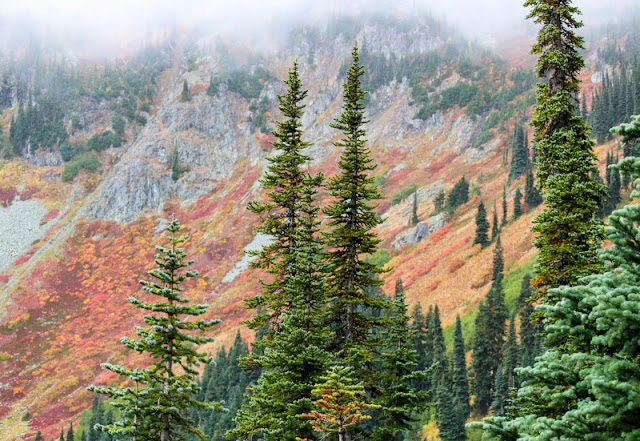 Even though I didn't have good visibility, I really liked the mix of fall and winter and the misty appearance of the trail. It made for some dramatic silhouettes of evergreen trees appearing out of the fog. It was the start of a winter wonderland as fall was on its way out. 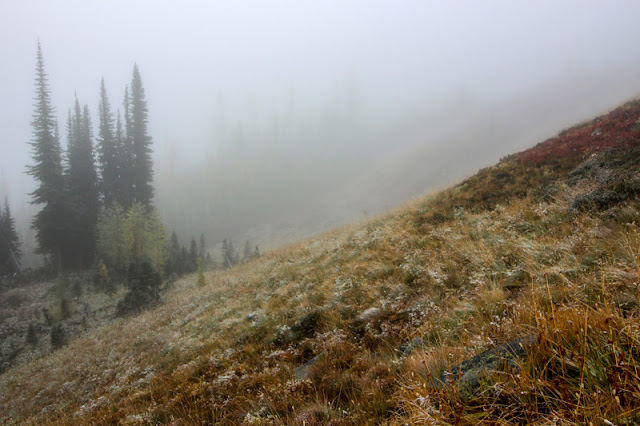 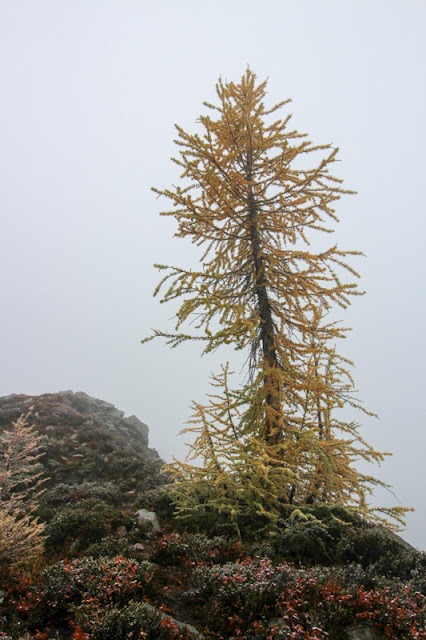 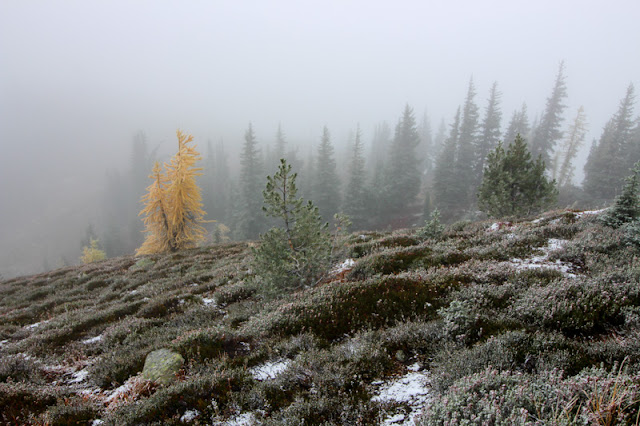 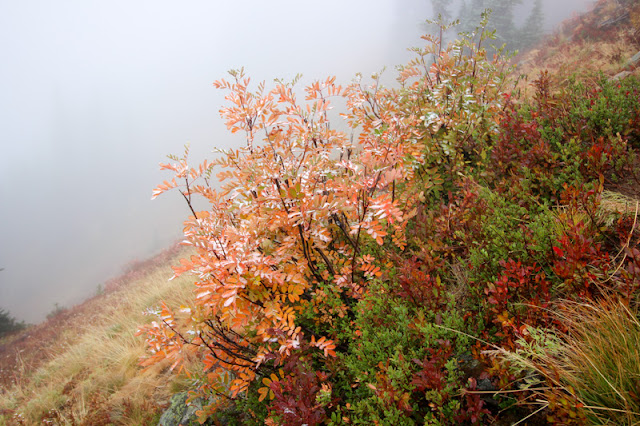 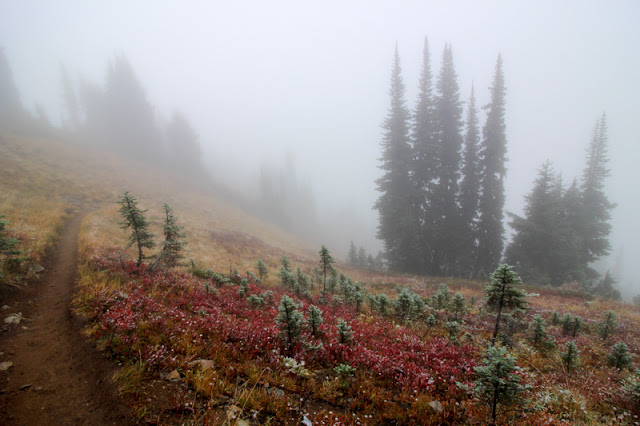 The trail wasn't difficult at all, and the only part that was a bit scary was when I was at the top of the pass. Up there, there were tons of "social trails" - trails leading off to different viewpoints. It wasn't always clear to me which trail was the main trail and what was a side trail, and there were two times I had to backtrack because the trail I was on ended up not going anywhere. I couldn't see where I was on the trail by looking at other peaks or seeing where the road was or where Lake Ann was because the visibility was so bad. I briefly worried about getting lost up there in the 20s with it actively snowing, but I managed to stay on the main trail and eventually came to a sign confirming that I was on the trail. After that, I ran into several other hikers coming up from the opposite direction. 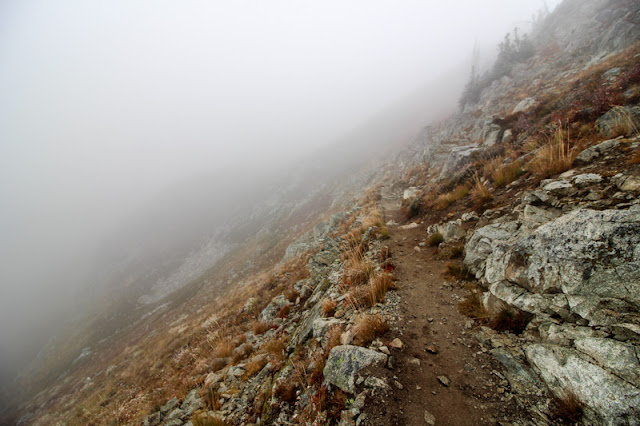 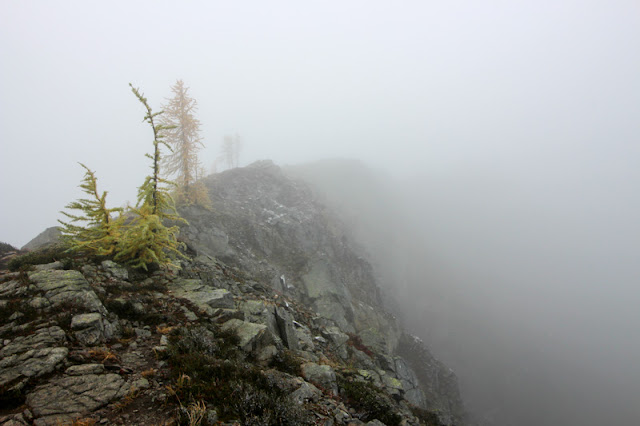 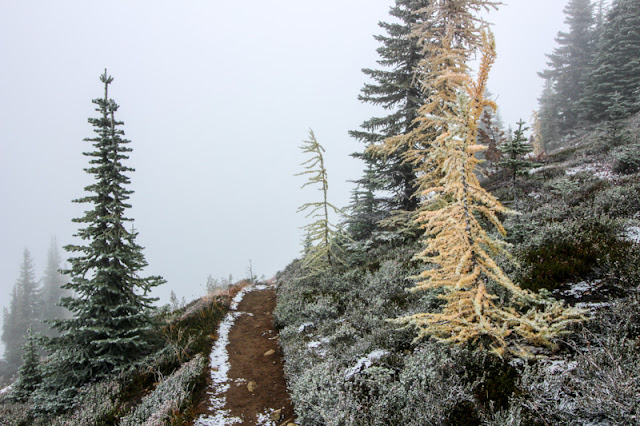 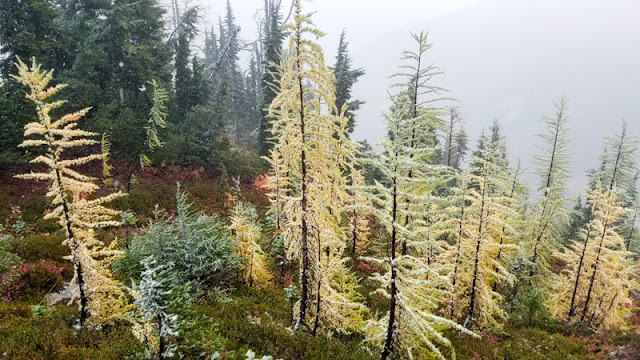 After going down towards Lake Ann, the weather cleared up a bit and the sun even came out for a few minutes. I loved the little island in Lake Ann, and how the lake was surrounded by fall colors. I definitely want to come back next year and do this hike in better weather. 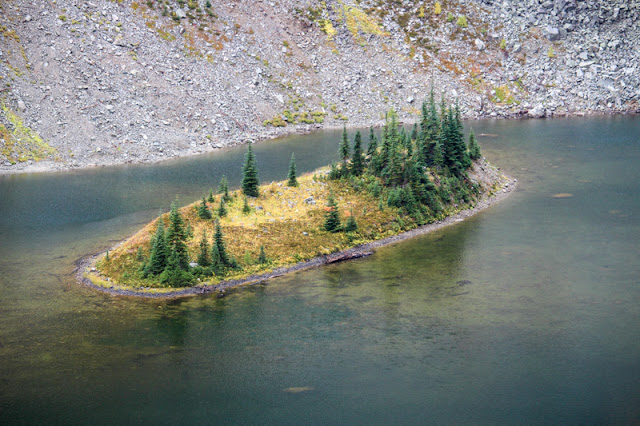 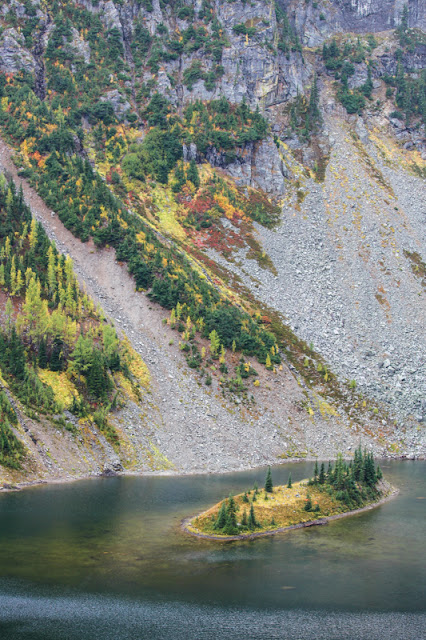 Once I was back at the trailhead, I drove about four miles to the Blue Lake trailhead for my second hike. The Maple Pass Loop trail was almost 8 miles, and Blue Lake ended up being around 4.5 miles. I saw several larch trees on my way to the lake, and then more at the lake itself. This was an easy trail and a good way to see larch trees and the Early Winters Spire in the Liberty Bell Group. 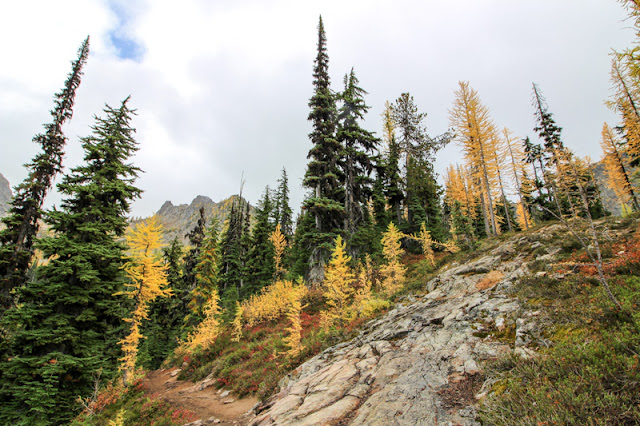 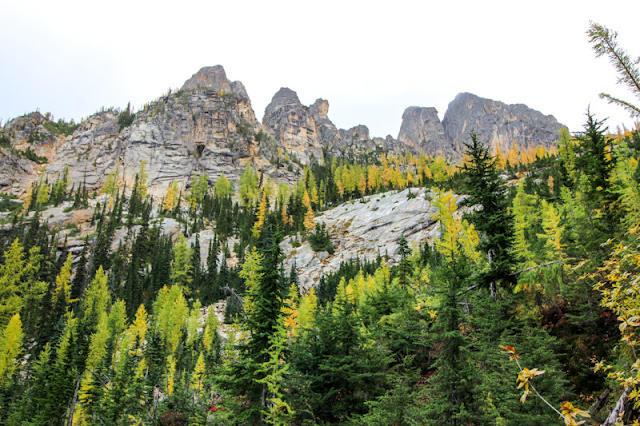 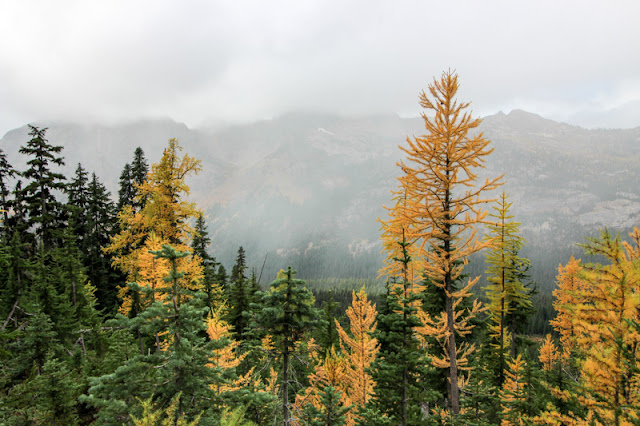 On Sunday, I had planned to hike to Cutthroat Lake and then continue on to Cutthroat Pass, and then possibly hike Easy Pass. The weather had other ideas. Getting to Cutthroat Lake was fine (an easy, flat 4 miles), but once I was there I looked up and saw that winter had come overnight - the pass was covered in snow. I thought about going up there to see how far I could get, but it was cloudy with a mix of rain and snow. I decided I didn't want to mess with winter in the North Cascades. 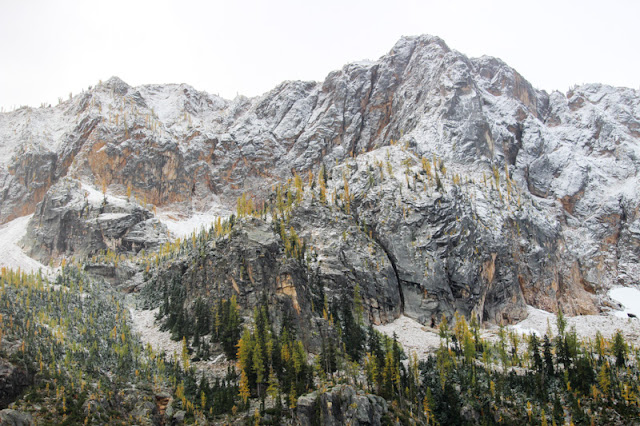 While I drove back through the pass, I stopped at a few viewpoints to take pictures of the surrounding peaks. It was snowing the entire time and I realized it was a good time to get out of the area, especially since I have little to no experience with hiking or driving in snow. 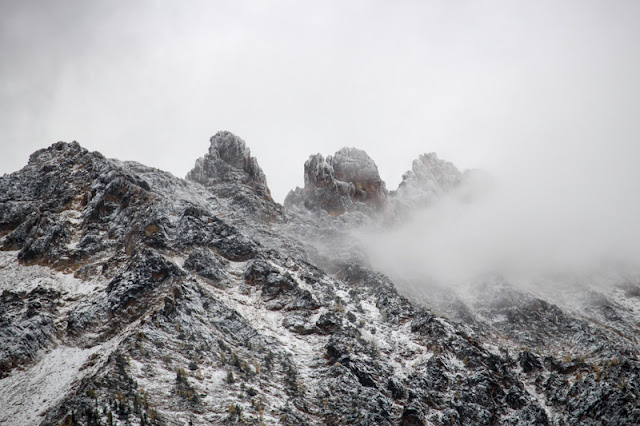 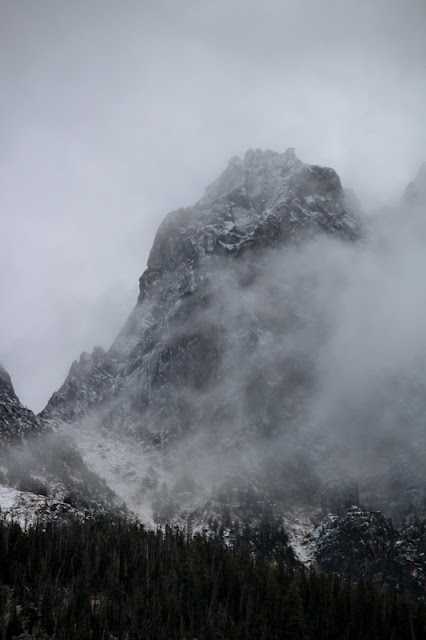 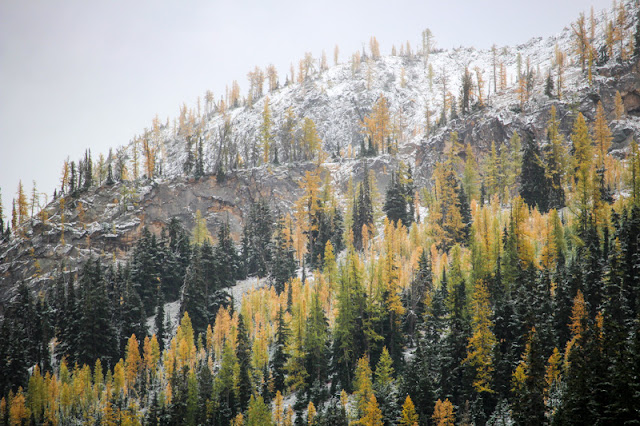 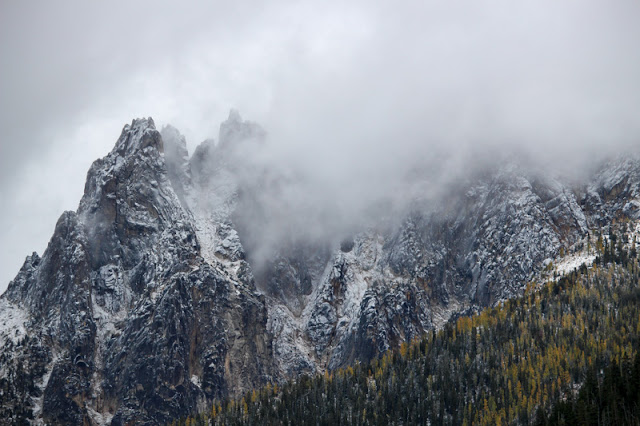 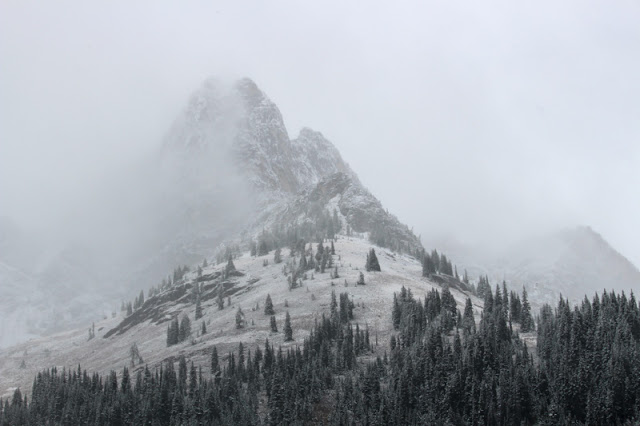 Even though the weather didn't cooperate, I appreciated the opportunity to photograph fall and winter at the same time. This was my first time hiking in the North Cascades, so it was also a good opportunity to scope things out and figure out what I'd like to do next year. I want to hike here more than just one weekend next fall, and I have to figure out if the four hour drive each way is doable in a day as well as hiking, or if I'll have to pay for a campsite and stay the entire weekend. Either way, this is definitely a priority for the coming year!
Posted by Rheanna Summers at 7:44 PM
Email ThisBlogThis!Share to TwitterShare to FacebookShare to Pinterest
Labels: hiking, trail report, Washington