One of my goals is to someday run an ultramarathon: 50k (30 miles) or longer. Since I've only run half marathons so far, I figured I should take the next step and run in a 30k (18 miles) to see how I feel about that. I figured that if I hate it, then an ultramarathon is probably not for me.

Back in April, I signed up for the Oregon Coast 30k. It looked like the race was in a beautiful location that I hadn't been to before, and the elevation gain seemed challenging but reasonable. At the time I signed up for the race, I was running often, including running to work on a route with several extremely steep hills. I figured by the time of this race I would be in great running shape.

However, in May I was diagnosed with mono. I would have just run through it (I did complete a 5k trail race at the peak of my symptoms), but the highlight of my year was in early June: a trip to Grand Teton and Yellowstone National Parks, where I would be running two half marathons and a 5k all in the span of a week. So I stopped running for the rest of May in order to recover as much as possible for my June races. (I completed all 3 of them; just slower than usual). Unfortunately, I put on 15 pounds and lost almost all progress I had made with running due to having mono. I was lucky, as I didn't miss any work and it didn't seem to hit me as hard as it hits other people, but it still slowed me down and I'm not yet back to normal when it comes to my pace times when running.


The Oregon Coast 30k has a cutoff time of 6 hours, including a 2 hour cutoff time for reaching the first aid station (6 miles) and a 4 hour 15 minute cutoff time (from the start time) for reaching the second aid station (13 miles). I'm not a fast runner in the first place, and given how slow I had become after mono, I was very worried that I would be too slow and wouldn't make the cutoff times for the race. Failing was a real possibility. I went into it with the attitude that I'd try my best, and if I failed it would be a good learning experience and provide lessons for next time, plus I'd still get to see all the beautiful scenery on the coast and stay in a lovely oceanfront hotel room.

For previous years' races, the weather was cold, windy, and rainy. This year, we lucked out and it was a beautiful sunny day. The race start time was 10am, which was nice because I didn't have to wake up super early, and I had time to eat breakfast, foam roll my IT bands, and do some light stretching. The hotel I chose was a 3 minute walk from the start and finish line, and I headed over about 10 minutes before the race began.

The first 3 miles were running through the town of Yachats and along the coast right near the ocean. Some of the course involved running on the shoulder of Highway 101 and at one point crossing it, but this wasn't a problem. Although the first 3 miles were generally flat, my legs felt awful. I felt like my muscles were tight and already tired. Once I got off the road and onto the trail, I felt better. The single track in this area was super soft. The course started to gain elevation, and almost everyone began walking (in my case, it was more like trudging up the hill feeling like I was dying). There was no way to run all the way up that first climb, which lasted about a mile. I was tired by the end of it. But this part of the course was one of the prettiest sections. The single track wound its way through mossy trees, with bright green moss and clovers on either side of the trail. 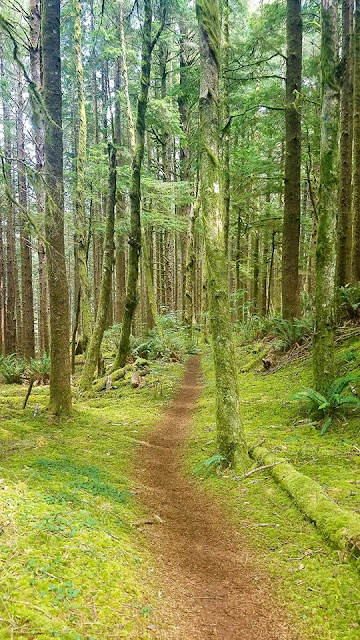 However, the trail that we were on in this section of the course, Amanda's Trail, has a sad history. Native Americans in Oregon were forcibly removed and sent to reservations. One of those people was Amanda, a blind woman from the Coos Tribe. Amanda was marched along with several women to Yachats, and she had a terrible time climbing around Cape Perpetua. It is not known whether Amanda survived. The trail is in tribute to her, and there is a statue on the trail. I did think about her while on the trail, knowing that however tired I was, I was out here choosing to do this, but some people had no choice.


Eventually I came out of the forest and was greeted with a view of the Pacific Ocean. At this point I was high on the bluffs and had to descend down to the aid station at Cape Perpetua. I was glad to finally be able to go downhill, and I passed several people on the way down. Perhaps it's due to being short and having a low center of gravity, but I excel at downhill hiking and running. It's a lot of fun to dodge roots and rocks at a high rate of speed. These parts of the race were where I made up as much time as I could after walking up the hills. I was starting to feel like I needed some extra energy, and I decided to eat some of my energy chews once I got to the aid station. In all of the race information given to us, the aid station was at 6 miles. However, I remember looking at my GPS watch and seeing that I was well into mile 6 and still not at the aid station. It ended up being more like 7 miles. This was the first cutoff, and I made it there with 20 minutes to spare. 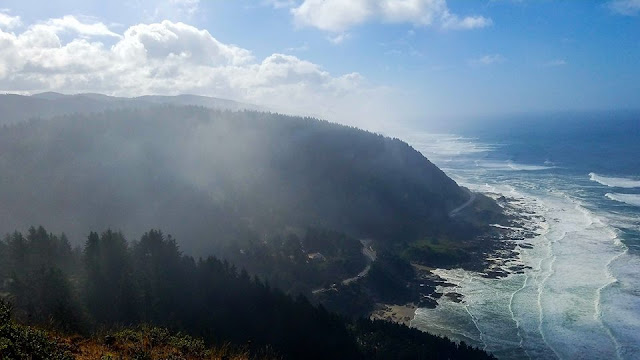 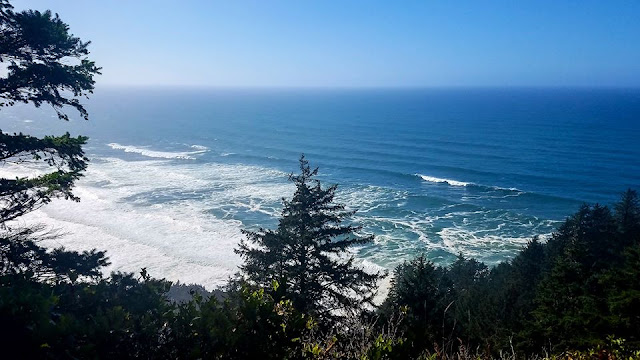 It was at this point that I realized what I had heard about the race was true - that it was a little longer than 18 miles. I started doing the math: it was 7 miles to the aid station, and we were supposed to go by it again around mile 13. That meant at least 6 miles around the loop part of the course, and then another 7 to go back the way we came from the aid station to the town and finish line. That totaled around 20 miles. I actually wasn't upset about this, as one of my goals for the year is to do a 20 mile run. My GPS watch recorded 20.46 miles for this race, so I no longer have to worry about when and how I'm going to do a 20 mile run - it's already done!

After the aid station, there was a short flat section before starting the second climb. I ran whenever I could, and on this section it was more due to the pack of people I was with than my own decisions. There were 7 or 8 people in front of me and it was single track, so it wasn't worth the effort to pass all of them, especially when I'm slow on the uphill parts and they'd end up passing me back. There were parts when I thought we could have been running, but they weren't, so I walked. When they ran, I ran. I did end up passing all of them on the way down.


Shortly before I got to the aid station for the second time, my watch let me know I had just run 13 miles. That is the longest distance I'd run prior to this race, so every mile after that was a new accomplishment. However, my legs were like "Okay, this is as far as we go, why are you not stopping?" They started to ache, and this lasted for the rest of the race. After a certain point, it felt like all the muscles on the back of my legs had detached and fallen off. Once I got to the aid station, I did a few stretches. I was doing well on time, as I got to the aid station with 45 minutes to spare before the cutoff.

Once leaving the aid station, I immediately started the last climb back up to the bluffs. My legs felt terrible and I was at the point where I felt like I could barely walk. But once I got to the top where it was flat and then downhill again, I somehow managed to run. Halfway through mile 17, I started to feel tired so I had another energy gel. I got about two sips of water, and then it stopped coming through the hose connected to my running pack with the water pouch. I thought it had malfunctioned somehow, and then I realized that for the first time in my life I had run out of water. I survived, but it sucked having no water for the last 3 miles of the race. Once I descended and came out of the forest, I began running at a relatively normal pace and didn't stop until I got to the finish line. Throughout the race I had planned on walking most of the last 2 or 3 miles since I knew I'd be tired and should have time to spare, but I think running out of water and wanting to be done caused me to run the whole way. I was surprised at how well and how quickly I could run those last couple miles after everything I had done.


When I saw the hotel with the finish line, I was very happy to be back and to be done. My watch gave me a time of 5:20:51 - I ended up with 40 minutes to spare before the cutoff. It turns out I didn't need to worry about this race as much as I did! I gained about 4,100 feet of elevation, which is more than I gain on most hikes I do. 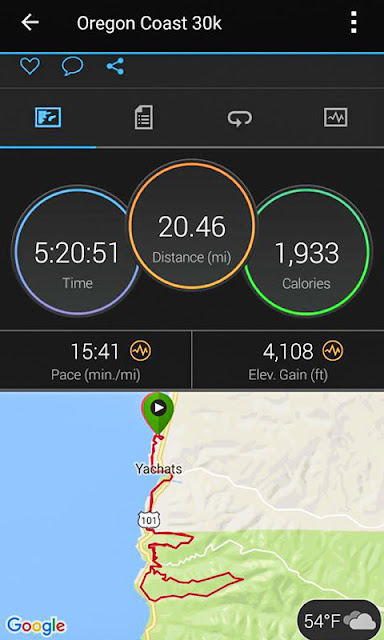 This race is one of the most physically challenging things I've ever done, but I'm glad I did it! It was a great experience with gorgeous scenery and a tough but reasonable course. Now that I've done 20 miles, an ultramarathon seems doable. It's just 10 more miles. I don't want to wing it though and go into it out of shape and not having trained like I did with this race. I won't be signing up for an ultra until I'm back in great shape overall and in great running shape. I'd like to get back to my normal pace and back to running 5ks and 10ks at my PR times, as well as do more trail running, especially running in the mountains. Once I get things back on track, I'm going to find the right ultra to sign up for and make that my next goal. 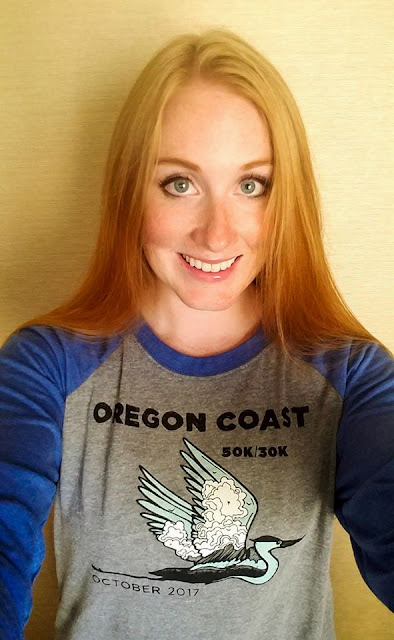